Last week, VIZIO invited journalists to its Irvine, California, headquarters to see its company's latest TVs and audio products, which were notable at least as much for their aggressive incorporation of Google technologies as they were for their design and... 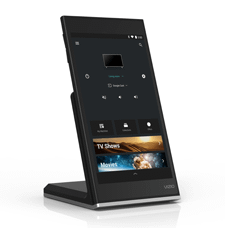 Last week, VIZIO invited journalists to its Irvine, California, headquarters to see its company's latest TVs and audio products, which were notable at least as much for their aggressive incorporation of Google technologies as they were for their design and performance.

The updated P Series UHD TV line, which falls between the top-shelf Reference Series and the M Series we previously reviewed, not only incorporates Google Cast, but each TV comes with a six-inch Android tablet that serves as its primary remote control. The Android tablet can access any Google Cast-compatible apps (such as Netflix, HBO Go, Hulu, and Pandora) and stream those images and sounds to the TV. The tablet also includes VIZIO's SmartCast app, which accesses all of the TV's control functions and menus. VIZIO also provides the SmartCast app for other Android devices and Apple iOS devices. A small, simplified infrared remote is also included. VIZIO says that SmartCast is the first Google Cast app that allows streaming of UHD and Dolby Vision content.

"This way, you never have to worry about updating your TV's apps because the companies making the apps will do that on their own and will push them out to the mobile devices," said Matt McRae, VIZIO's chief technology officer.

Google Cast is also incorporated in a new soundbar and two new wireless speaker models, all of which can use the SmartCast app to stream audio services like Pandora and Spotify. The Google Cast feature allows the new audio products to be used in Sonos-style multiroom systems with other Google Cast-compatible products or any product connected to a Chromecast Audio dongle. All of the new models also offer Bluetooth wireless.

The soundbar is the SB4551, a 45-inch-long model with 5.1-channel sound. The SB4551 has two unusual features besides Google Cast. First is its subwoofer, which is only three inches thick so that it can slip under or behind a couch or sit unobtrusively against a wall. The sub incorporates an eight-inch woofer and appears to be a bandpass design, emitting sound entirely from a side vent rather than from exposed drivers. (That usually means more deep bass output at the expense of a somewhat boomier sound.) Second is the soundbar's slim form factor: It measures just two inches high and wide, and its surround speakers share the same dimensions.

The most interesting of the new wireless speakers is the Crave 360. It features four drivers positioned at 90-degree angles for 360-degree sound, plus a down-firing woofer, all packed into a cylindrical aluminum enclosure. The Crave 360 is portable; it incorporates a carrying handle and a rechargeable battery rated at eight hours running time. There's also the Crave Pro, a larger model without a battery designed purely for home use. It incorporates two 5.25-inch woofers and two smaller midrange/tweeter drivers.

Pricing and availability of the new VIZIO audio products have not yet been determined, although I'm confident that other companies will begin working on under-couch soundbar subwoofers as soon as they finish reading this article.

Here is the official press release on the new P Series:
VIZIO, Inc. announced today the launch of VIZIO SmartCast, its next generation smart entertainment ecosystem which will span displays, sound bars and standalone speakers. VIZIO SmartCast debuts on the all-new P-Series Ultra HD HDR Home Theater Display collection, the first Ultra HD and High Dynamic Range offerings to fully integrate Google Cast technology. The displays are controlled by the VIZIO SmartCast app that comes preinstalled on the included 6" 1080p Android Tablet Remote. P-Series marries its intuitive smart features with unmatched picture quality technologies that were first brought to market on the VIZIO Reference Series. Available now, the collection starts at an MSRP of $999.99 for the 50" class size.

The VIZIO SmartCast app turns every mobile device screen into a remote control and represents a paradigm shift in content discovery. Instead of jumping between apps, VIZIO SmartCast allows users to search and browse content first by genre across multiple apps at once, then select the app or source to play the content. The app also simplifies onscreen navigation. Rather than struggling to see and adjust settings or navigate apps from across the room, VIZIO SmartCast users gain access to all menus and playback controls through the app. With the VIZIO SmartCast app available for download on iOS and Android devices, consumers will never have to deal with a lost remote again. The VIZIO SmartCast P-Series Ultra HD HDR Home Theater Display boasts the same advanced picture quality technologies first released on the 2015 VIZIO 120" and 65" Reference Series. Ultra HD featuring High Dynamic Range with Dolby Vision content support transforms the entertainment experience with dramatic imaging, incredible brightness, contrast and color that brings content to life. New release titles such as In the Heart of the Sea and Point Break continue to roll out through video-on-demand services like VUDU, which currently has more than 30 Warner Bros. titles available in the Dolby Vision format.

With Google Cast built in to every VIZIO SmartCast device, consumers can access thousands of mobile apps they already know and love. By simply tapping the Cast button, consumers can easily watch content go from their mobile screen to any VIZIO SmartCast or Cast-enabled device on their home WiFi network. And with casting over WiFi, users can still multi-task on the P-Series included tablet remote or their own mobile device without interrupting what is casting on the display.

VIZIO SmartCast makes its debut on the P-Series Ultra HD HDR Home Theater Display with additional collections and products to follow. P-Series is available now with more information and retailers available at VIZIO.com.

You'll automatically be entered in the HTR Sweepstakes, and get the hottest audio deals directly in your inbox.
Author
Brent Butterworth
When you buy through links on our site, we may earn an affiliate commission. Your support is greatly appreciated!
This is the static ad content. This is just a placeholder for now to get things styled.
Visit Website