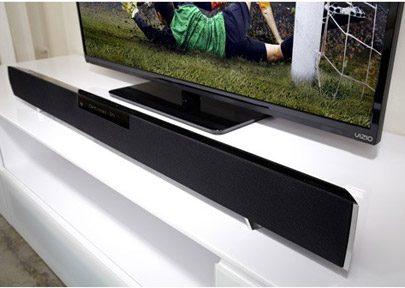 Vizio is a company that makes products for many different parts of the home theater. Lately, the company has been taking great strides in performance. Does the 40-inch M-series 2.1 soundbar benefit from this? 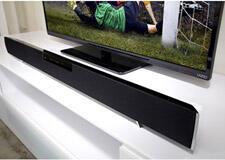 Vizio has been on a tear recently what with their newly released 60-inch LED HDTV, which I reviewed a month ago, and now word of a 70-inch variant hitting stores soon. With all that HDTV goodness, one has to consider acquiring sound to match and, thankfully, Vizio has a few items, specifically their new M-Series soundbar and wireless subwoofer reviewed here, to fill the void often left by underwhelming built-in display loudspeakers.

Retailing for $229.99 and sold direct through a slew of retailers, as well as online via Vizio's own website, the M-Series (model number SB4021M-A1) is a sight to behold. Its tailored lines and aluminum sculpted sides give the M-Series soundbar a very Bang & Olfusen look. I especially like the modern touch that the slightly slanted aluminum legs give to the soundbar's otherwise sleek industrial design. The soundbar itself measures 40 inches wide by four inches tall (with legs attached) and two inches deep. On its own, the soundbar weighs just under five pounds. It can be table-mounted out of the box, though hardware is included to wall-mount it above or below your HDTV; just remove the attached legs and you'll be in business. There is a modest-sized display on the front of the soundbar, though it auto-defeats when not in use - another nice touch. Manual controls are located across the top, with inputs resting along the back. Speaking of inputs, these include a single 3.5mm mini-jack (analog), a single optical input (digital), a single coaxial input (digital) and a USB input to connect a flash drive or portable music device.

Internally, the soundbar features a pair of two-and-three-quarter-inch full-range drivers good for a reported frequency response of 150Hz to 19.5kHz. Add the included wireless subwoofer and that frequency response extends down to 40Hz, thanks to the subwoofer's six-and-a-half-inch powered driver. The entire system is capable of playing back most surround sound codecs, albeit downressed to two-channel, but it also has enhancements for Dolby Digital, SRS TruSurround HD and SRS TruVolume. It does not feature any sort of wireless connectivity, though.

As for the remote, it's pretty basic, featuring controls for power, input, volume, mute and menu. Menu is the option you select when dialing in the subwoofer's bass, though in my room, its default setting proved to be the best fit.

In terms of sound, I must admit that I was pleasantly surprised by the M-Series soundbar and found it to be not only capable for its asking price, but among the better budget soundbars available today. While not as spatially fantastic as some, the M-Series was still capable of recreating a very convincing wall of sound that, while not surround, wasn't confined to its modest cabinet. Bass from the wireless subwoofer was surprisingly agile and taut and able to keep pace with the many blows and explosions contained in the climactic battle in the Blu-ray disc of The Avengers (Walt Disney Pictures). Vocals had good body and presence and, much like the rest of the sound emanating from the soundbar, they were not constrained by its physical cabinet (a trait a lot of soundbars can't match). The tonal quality overall was largely neutral, with maybe just a hint of warmth, the result of a slight high-frequency roll-off that didn't present itself too openly, unless I really listened for it. The bigger coup here is that, for less than $250, the M-Series soundbar from Vizio manages to bring enough big-screen sound to the party, allowing even blockbusters like The Avengers to be enjoyed without requiring a boatload of equipment or speakers. Is the M-Series better than a discrete multi-channel setup? No, but as an upgrade to bad internal speakers found in all HDTVs, it's 1,000 times better and for many it's enough of the right stuff to get them interested in exploring multi-channel further in the future. In other words, I liked it.

Read about the high points and low points of the Vizio M-Series soundbar on Page 2. 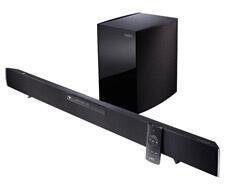 High Points
Next to Samsung, I'm not sure which company does industrial design better than Vizio right now when it comes to mass-market consumer products, and the M-Series soundbar is no exception.
There is a surprising attention to detail with the M-Series soundbar, which shows in its visual style as well as its sound quality.
Vizio's claim of one-step setup is true, making the M-Series soundbar the easiest soundbar in terms of setup that I've ever encountered.
The soundbar's overall sound quality is very enjoyable and surprisingly robust for a bar of its price and driver complement. The M-Series easily puts much (if not all) of its direct competition to shame.

Low Points
Even with a subwoofer in tow, the M-Series soundbar system isn't going to plunge as deep as some 2.1 soundbar offerings, though in my room and in my tests, its slight lack of bass wasn't a distraction.
I really would've liked to have had Bluetooth connectivity at a minimum, for soundbars are quickly becoming an inexpensive way to do distributed audio for many users.

Competition and Comparison
There is no shortage of soundbars these days. Those in the M-Series' price range represent largest group. Some notable competitors that come to mind when discussing the M-Series areLG's fantastic NB3520A, Panasonic's SC-HTB20 and Samsung's HW-D450. I believe the Vizio to be head of the class here, though I do like the LG for its wireless connectivity, specifically Bluetooth, which I used on multiple occasions and missed with the M-Series. Still, all are worthwhile soundbars and deserving of a look. For more on these soundbars and others like them please, visit Home Theater Review's Soundbar page.

Conclusion
In my opinion, Vizio's been a little bit of a hit machine as of late, first stepping it up with HDTV performance and now doing the same with soundbars. I hope the company keeps up this trend, for Vizio is one of the larger brands that represent what real people are
buying and the better the company does, the better chance specialty AV can do as a whole. While that argument may seem weak or counter-intuitive, as many blame Vizio for their woes, I argue they've got it wrong and that Vizio is acting as a gateway for many to legitimately enter the space. It's our job now to hopefully tempt those who may purchase the M-Series to look up-market at maybe an AV receiver and some bookshelf speakers down the road. In the meantime, the M-Series soundbar from Vizio is a wholly affordable and enjoyable upgrade to any HDTV setup.