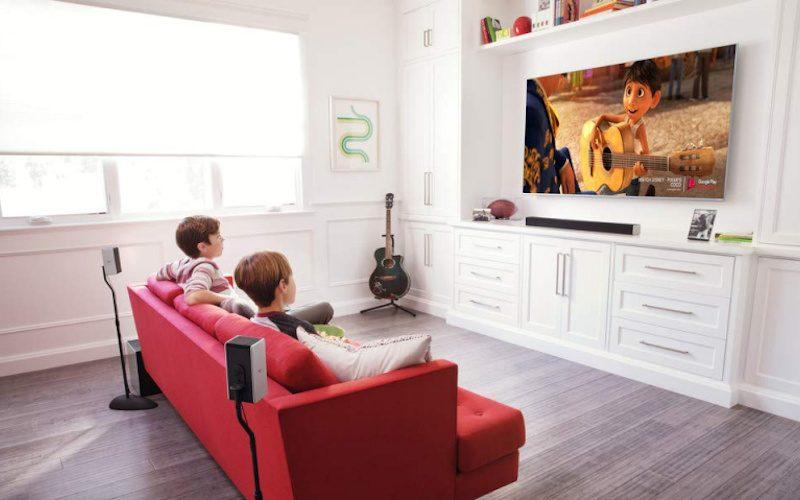 Perched in front of my 70-inch television, Vizio's 36-inch soundbar looked curiously diminutive, if not downright puny. By all rights, the SB36512-F6 Dolby Atmos soundbar should have been way too small for proper imaging when paired with that TV, particularly... 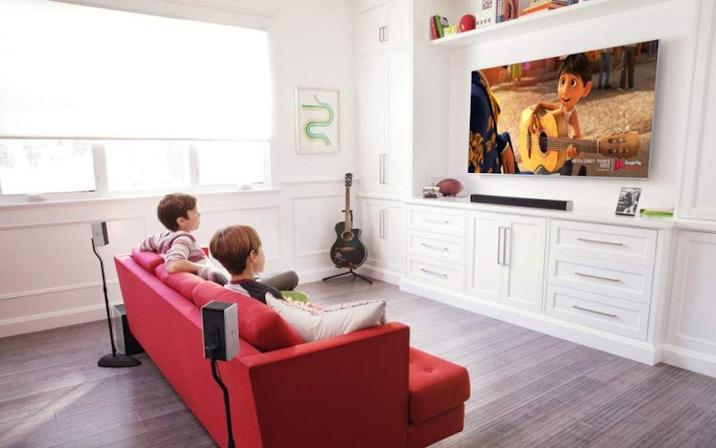 Perched in front of my 70-inch television, Vizio's 36-inch soundbar looked curiously diminutive, if not downright puny. By all rights, the SB36512-F6 Dolby Atmos soundbar should have been way too small for proper imaging when paired with that TV, particularly in the large (25 by 16 foot) room in which it was tested. And if you're one of those who believe that size doesn't matter, I suggest you ask an NFL offensive lineman or thoroughbred horse racing jockey if they agree.

In this case, I didn't have an opportunity to pair my big screen and spacious room with a more appropriately sized soundbar. Vizio sent the SB36512-F6 for evaluation, although its 10-inch wider and more powerful big brother, the SB46514-F6, would have been a better match for my setup.

Just three feet wide, 2.5 inches high, 3.2 inches deep, and weighing a svelte 5.6 pounds, the SB36512-F6 certainly looked like it was overmatched. By comparison, the Samsung HW-N950 soundbar I'd just finished reviewing packs some serious physical proportions to go with its sonic punch. The Samsung's main bar is more than a foot wider and inches taller and deeper than the SB36512-F6. At nearly 20 pounds, it also weighs more than three times as much. There is a similar size disparity between the two manufacturers' satellites and subwoofers.

Clearly, these two systems are not punching in the same weight class. Throwing the Vizio into the same ring in which I'd just evaluated the stellar Samsung setup seemed totally unfair, like pitting Peter Dinklage against Andre the Giant in a no-holds-barred death match. Peter seems tough--I've seen him overcome all sorts of odds on Game of Thrones--but fair is fair. Although I wasn't comparing the Samsung and Vizio soundbar systems head-to-head, I was asking the former to follow a tough act and do it in an environment that seemed ill-suited to its size.

Turns out I wasn't asking too much of the SB36512-F6, whose performance simply blew me away. No doubt that had something to do with my expectations... or lack thereof. Sometimes you thoroughly enjoy a movie your friends hated simply because you expected so little of it. I didn't expect much from Vizio's 5.1.2 soundbar system because of its size, its price (currently just $400), and the act it had to follow. Instead, it delighted me with terrific tonal range, accurate imaging, a deep and wide soundstage, and bass that packed a punch.

The SB36512-F6 took less than 10 minutes to go from being unboxed to soaring past my expectations. Thanks to its design and clearly labeled and color-coded connectors and cables, this is one of the easiest true Atmos systems to set up. I placed the soundbar in front of my TV, plugged in its power cord, and connected the included HDMI cable between its ARC-enabeled (Audio Return Channel) HDMI port and the appropriate HDMI port on my TV.

The SB36512-F6 contains an array of other inputs and connectivity options. These include a second HDMI input, a coaxial/SPDIF connector, 3.5mm stereo minijack, Toslink optical input, and a USB port that can be used for playing WAV files from a thumb drive. There's also an ethernet port, as well as built-in 802.11n WiFi, along with Bluetooth and Chromecast connectivity. Like most soundbar systems with subwoofers, the SB36512-F6's bass box connects wirelessly to the main bar. The components mated automatically as soon as I plugged both into wall outlets. Prior to that, I had connected the two rear-channel surround speakers to the subwoofer using the included RCA plug-terminated cables. You read that right: The non-amplified satellite speakers get hardwired to the subwoofer, in contrast to most other soundbar sats which are powered by AC and receive wireless audio signals. Vizio's satellite speaker connecting cables are long (26 feet) and thin enough to run around the perimeter of some rooms, but not mine. That required me to place the subwoofer in a rear corner of the room, about four to five feet to the side and slightly behind the couch and around 15 inches from each converging wall.

That resulted in the sub delivering plenty of punch without being too boomy. I initially worried the sub's location would present imaging problems since solo subwoofers generally work best when placed toward the front of the room. Turns out there was no need to worry; Vizio's six-inch subwoofer never seemed detached from what I was watching.

Its wired satellites help make Vizio's SB36512-F6 by far the most affordable Atmos sidebar with dedicated height speakers. Vizio built its reputation on delivering big bang-for-the-buck, and the SB36512-F6 enhances that reputation.Since every listening environment is different, you might need to shift the sub around for best results, but I was happy with it as described. And I actually preferred Vizio's surround setup to the typical "wireless" satellite speaker that needs to be plugged into an AC wall outlet. The wires that tether the SB36512-F6 satellites to the sub are much thinner and easier to hide than AC cords and were totally inconspicuous lying on the floor behind my couch, which sits a couple of feet from the room's rear wall. Vizio doesn't specify the exact components that comprise its incredibly affordable 5.1.2 soundbar system. The main bar contains five wide-range speakers that appear to be of similar size and design. Three of them face forward to deliver the left, right, and center channels. The other two drivers deliver the Atmos height effect, pointing upward at a 20-degree angle toward the listener. Vizio says those speakers should be effective with ceiling heights between 7.5 and 12.5 feet. My demo room has an eight-foot ceiling that was about 6.5 feet above the soundbar. There are no height-effect speakers in the satellites; each of which contains a single forward-firing driver. Vizio's larger and more expensive SB46514-F6--$900 on Amazon--is a 5.1.4 system with a larger (10-inch) subwoofer and an additional height speaker in each of its satellites.

All other things being equal, more speakers should translate to more realistic and immersive sound when listening to the object-based audio in Atmos-enabled soundtracks. Yet I found the SB36512-F6 quite satisfying with just two height speakers. The small and affordable system consistently and convincingly surrounded me with sound that moved in conjunction with whatever was happening onscreen. I often marveled at its imaging and soundstage given that the main bar is nearly two feet narrower than my TV screen and lacks side-firing speakers.

Despite its component size, the system had no trouble filling my room with distortion-free sound. Vizio rates the system's maximum output at 101dB, which a company spokesperson said is loud enough to equal the sound of a symphony orchestra at full volume or drown out a snowmobile. I haven't been on a snowmobile in years, but I can attest that the SB36512-F6 gets plenty loud. The thunder boomed in Dolby's "Amaze" Atmos demo and the system delivered an appropriately dynamic climax for the trailer's lush orchestral ending.

The SB36512-F6's handling of object-based audio imaging also impressed. I heard the rain plummeting down and all around me in "Amaze." And during "Leaf," another Atmos demo trailer, I closed my eyes and found myself in a forest, surrounded by chirping birds with a bullfrog croaking far off in the distance. Then a whistling wind whipped around me, sending leaves flying and snapping a seed pod from its branch. Thanks to Vizio's soundbar, I was able to follow the pod's flight aurally as it fluttered and floated through the air, changing direction like a gyrating gymnast before plopping into water with a surprising splash.

The SB36512-F6, which decodes nearly all of the popular audio formats with the exception of DTS:X, also did a very nice job with dialogue. I could actually decipher most of Benicio Del Toro's mumbling in Sicario and Keanu Reeves' monotone muttering in John Wick: Chapter 2.


I didn't listen to a lot of music with the system but was pleased with what I heard from the classic rock music soundtracks of Guardians of the Galaxy and Guardians Vol.2. I got comparable quality when I streamed several MP3 tracks from my phone using Bluetooth, and listened to Spotify and Pandora using the soundbar's built-in Google Chromecast capability.

The soundstage isn't expansive, but it is large enough that it never seemed as if the music was emanating from such a tiny cabinet. Rock vocals were delivered clearly, and my ears had no trouble picking out individual instruments.

Guardians of the Galaxy Vol. 2

The instrument Vizio provides in the box for controlling the SB36512-F6 is an IR remote with just seven buttons, a directional touchpad, and a too-tiny/too-dim digital display. Fortunately, its controls are so intuitive the remote is easy to operate by feel. The SB36512-F6 also can be controlled using Vizio's free SmartCast app, which provides greater and more direct control of all the soundbar's functions and makes it easy to stream content to it.


Simply put, Vizio's SB36512-F6 has no direct competition because any other Atmos soundbar system with dedicated height speakers and satellites will cost you hundreds and hundreds more. Its closest competitor, in fact, is its $900 big brother, the SB46512-F6. Willing to spend more? Consider Samsung's best-in-class HW-N950 or LG's SK10Y with optional SPK8-S satellites.

Conclusion
Vizio's SB36512-F6 5.1.2 soundbar system may be small, but it delivers a solid acoustic punch that belies its size. It may not prove unequivocally that size doesn't matter, but it is pretty convincing evidence that Vizio delivers value as well as anyone in the AV business.