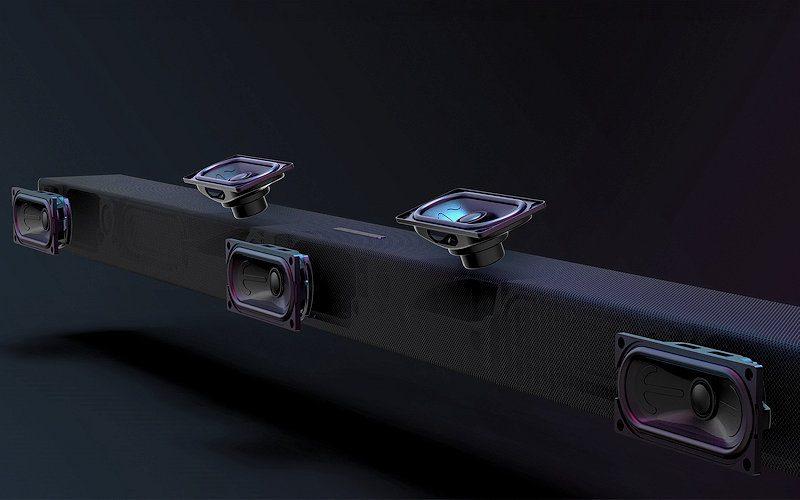 Scott says the SB46514-F6 is a versatile and full-featured 5.1.4 audio system that sounds great, is easy to set up, and seems like a bargain compared to other Dolby Atmos soundbars. 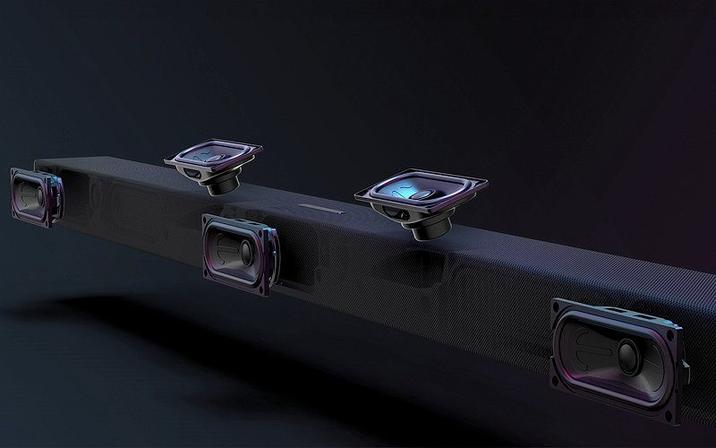 In my rave review of Vizio's 36-inch SB36512-F6 Dolby Atmos soundbar last year, I expressed surprise over how well the smallish system performed with a 70-inch television in a 25- by 16-foot room. Although I hadn't tested it at the time, I wrote that it's big brother, the 46-inch SB46514-F6 ($999.99 MSRP but typically around $750 at Best Buy and Amazon), seemed like a better mate for the fairly large room and TV ... at least on paper.

After testing it, I can confirm Vizio's 46-inch 5.1.4 Dolby Atmos soundbar system is no paper tiger. The SB46514-F6 is, in design and performance, similar to the SB36, but does everything with a little more swagger and delivers a more immersive listening experience with enhanced Atmos height effects.

You don't need to be Sherlock Holmes or Hercule Poirot to decipher the reasons why. Compared with the SB36512-F6 5.1.2 system, the SB46514-F6 5.1.4 system has a larger subwoofer, its soundbar adds three tweeters and two passive radiators, and each of its rear surrounds adds a dedicated up-firing height-channel speaker. If you're keeping score, that's a total of five speakers and two passive radiators that the SB36512-F6 doesn't have. Up front, a trio of 0.79-inch tweeters account for the three additional speakers. Each is paired with a 1.75- by 4.25-inch mid-bass driver, and together they comprise the left, right, and center audio channels. The 1.6- by 5.36-inch passive radiators are located just inside the left- and right-channel tweeters. Near the middle of the soundbar, to either side of the center-channel driver and tweeter, are left and right up-firing drivers measuring 2.33 by 2.95 inches. Vizio has managed to contain all the components in a tidy soundbar that should clear the IR remote sensors of most stand-mounted TVs. Although it is a foot wider than the SB36 and, at 7.2 pounds, outweighs it by 1.6 pounds, it is only fractions of an inch higher and deeper at 2.52 and 3.34 inches, respectively. The 6.52-inch high, three-inch deep, and 2.67-inch wide surrounds are also compact and weigh around 1.3 pounds apiece. Again, that's just fractions of an inch larger and just shy of seven ounces heavier than the SB36 surrounds. Despite the minimal increase in size, Vizio managed to endow each SB46 satellite with a 1.97-inch up-firing speaker dedicated to height.

The SB46 subwoofer is noticeably larger than the SB36 sub. You may want to tone up at the gym before hoisting the former's 32-pound subwoofer out of its snug foam packaging. Featuring a 10-inch, side-firing driver enclosed in a 14- by 15- by 14-inch cabinet, it weighs three times as much as the SB36512-F6's subwoofer, which featured a 6-inch driver in a cabinet about inches smaller in height and depth and about half the width of the SB46's sub.

The performance specs vary, too. Vizio rates the SB46 subwoofer's frequency response at 30 to 160Hz, compared with 40 to 130Hz for the SB36. The company doesn't typically provide power output specs for its speaker systems, choosing instead to reference sound pressure level capability. The rating is 105dB for the SB46's sub and 101dB for the SB36's. For comparison purposes, an increase of 3dB represents a doubling of acoustical energy.

Despite its relatively small size, I said in my previous review that the SB36 subwoofer packed the punch of Mike Tyson in his prime. Given that, I guess I'd have to say that the SB46 subwoofer packs the punch of Mike Tyson and Tyson Fury pounding you at the same time. It was wallboard-shaking; so powerful at first that it overwhelmed the rest of the audio and was too directional when placed in a corner about eight feet to the side and a few feet in front of my listening area. That was the case even when I turned down the subwoofer's volume, which can be done using the included IR remote or Vizio's terrific SmartCast Mobile app for Android or iOS devices. But moving the subwoofer a foot from the two converging walls eliminated the bombastic bass and my ears' ability to pinpoint its source. I prefer placing subwoofers on the same plane as my TV and as close to it as possible. But the SB46 requires the satellites to be hardwired to the wireless sub. Vizio provides a pair of fairly inconspicuous, 26-foot cables for those who can conveniently run the wires around a room or under a rug. My room doesn't allow for either, so I placed the sub in a rear corner, where the wires were out of the way and out of sight. Since most wireless satellites need to be plugged into an AC outlet, I think Vizio's design is actually more convenient, provided you find a spot where the subwoofer's location can't be pinpointed.

Not counting the couple of minutes spent relocating the subwoofer, it took only about 10 minutes from unboxing the SB46514-F6 to using it. That's a testament to the system's quick and flawless wireless syncing and the tidy packaging of all necessary accessories – including clearly labeled and color-coded connectors and cables – in the box. Getting true, 5.1.4 Dolby Atmos sound from a system with four dedicated height speakers has never been quicker or easier (and isn't ease a major reason soundbars are so popular?). After connecting the components and plugging in their power cords, I turned on the TV. Because the SB46514-F6 and my Vizio E70-F3 TV are both Consumer Electronics Control (CEC) compliant, the soundbar powered up when I turned on the TV and automatically synced to the subwoofer and satellites.

The SB46514-F6 includes the same fairly comprehensive collection of connectivity ports and options as the SB36512-F6. There's an HDMI 2.0 port and 3.5mm stereo minijack inputs, coaxial/SPDIF and TOSlink optical outputs, and a USB port that can be used for playing WAV or MP3 files from a thumb drive. There's also Bluetooth and Chromecast connectivity for streaming music, and an ethernet port and built-in 802.11n WiFi.

After being so impressed with the SB36, I was eager to put the SB46514-F6 through a serious workout. Listening to Dolby's Amaze and Leaf Atmos demo trailers, it didn't disappoint. Amaze was ... well, amazing. The synthesizer thumping on the title screen and the booming thunder of a tropical storm a few seconds later could be felt as well as heard. My room shook when the thunder cracked, and it trembled when it rumbled. And the bass wasn't just loud; it was realistic. It felt as if my home was in the middle of a thunderstorm and the lights would soon be flickering. I also heard rain beating on the roof, a testament to the SB46514-F6's front and rear height effects speakers.

Listening to the Leaf trailer may have been an even better demo of those height effects because of their subtlety. As the trailer began, Vizio's soundbar system put me in the middle of a forest. I could hear a frog croaking in the distance, unseen birds chirping all around me, and the branches above me creaking as the wind picked up. Soon it was whipping around and above me, where I saw a seed pod hanging from a branch and then dislodged by the wind. I could actually follow the leaf's trajectory with my ears as it twirled around while tumbling to earth.

When it plops into a pool of water, it causes an uncharacteristically strong ripple that turns into an orchestral ending that sounded lush and resonant via the SB46514-F6. I listened to a variety of more conventional music on the system and was impressed. Casual listening to CDs and classic rock streamed from Spotify and Pandora revealed a large soundstage, fine imaging, and good tonal balance and range. In other words, the SB46514-F6 is a credible music performer, too.

How does the SB46514-F6 compare to the competition?


With its brawnier subwoofer, additional speakers (including dedicated height effects speakers in the satellites), and wider front cabinet, Vizio's SB46514-F6 is clearly a step up in class from its similar but smaller SB36512-F6 sibling. Yet that may be its closest competitor, because of their similarities.

The SB46514-F6 is significantly less expensive than the Samsung Harman Kardon HW-Q90R, a 7.1.4 Dolby Atmos Soundbar with 17 speakers and a $1,500 price tag. I haven't listened to it yet, but I was impressed with its now discontinued predecessor, the HW-N950 (reviewed here).

The Vizio SB46514-F6 is a versatile and full-featured 5.1.4 audio system that sounds great, is easy to set up and operate, and seems like a bargain compared with other Dolby Atmos soundbars in its performance class. The SB46 definitely delivers a wider soundstage, more power, more accurate height effects and a greater immersive experience than the smaller SB36512-F6. But the $500 SB36 is so good that buyers – especially those with smaller rooms – will have to decide for themselves if the performance upgrade is worth the additional cost.