They may look delicate, but Waterfall Audio's Elora Evos deliver rich, dynamic sound that you'll fall in love with at first listen. 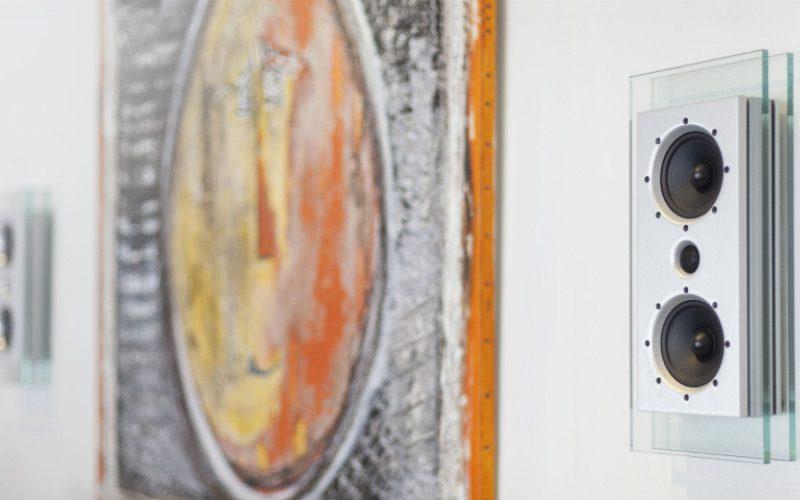 Most loudspeakers, even those of an audiophile grade, are made out of MDF plywood and are either painted black, some other decorator color, or don a fancy wood finish--generally a veneer. Waterfall Audio speakers are something of a fresh departure from that norm. In 1996, a young Frenchmen named Cédric Aubriot realized a unique design concept he would refine over the next 22 years--glass loudspeakers. Yes, you got that right. The speakers are actually physically clear, thus not hiding the internal workings of these French-made gems. They come with bespoke driver designs and unique custom manufactured crossovers that make them very different from the norm and competitive with some of the most respected brands in loudspeaker design today.

The topic of today's review is the Waterfall Audio Elora Evo loudspeakers, which cost $2,800 per pair and are sold at select dealers in the United States. When I first unboxed these speakers, which come very carefully packed to avoid any possibility of damage, I was surprised by how heavy and solid they felt, with a central body made of a block of aluminum surrounded by a solid one-centimeter-thick piece of glass acting as a frame. The two five-inch drivers on the front panel surround the one-inch soft dome tweeter in a classic D'Appolito configuration, thus this combination can be mounted to small stands or wall brackets either vertically or horizontally. It's easy to see how this shape and size fits neatly around a flat panel TV mounted on the wall. From an audiophile perspective, I wanted to experiment with the Elora Evo out and away from the walls to hear if they could also be used effectively as free-standing speakers or located on a mantel piece or end table without sacrificing fidelity. The clean design looks great from any angle, particularly if the sunlight catches them at that perfect angle. From moment one, I loved what I heard from the Waterfall Audio Elora Evo. The tightly focused soundstage revealed a wealth of fine details with an image that clearly felt like the sound emanated from well back into the rear wall of my listening room. This effect was enhanced significantly when I added the companion HF2-250 subwoofer, bringing the low end frequency response of the Elora Evo alone from 120 Hz down to a reported 19 Hz. No one should doubt the improvements made by utilizing a matching subwoofer to any system. But here, both speaker and subwoofer are made for each other and sold to work best together. I tried the woofer front and center between the two Elora Evo speakers, on one side of the stereo pair, and also across the room so it could be hidden away out of site. In each case, the included controls (volume, phase, crossover point) on the powered HF2-250 were easily adjusted by ear to make for one of the best sounding and affordable full range systems that I've heard in years, and without hyperbole I had this system unboxed, voiced, and setup including the subwoofer in about 20 minutes.

Listening
Big dynamic orchestral music, such as that recorded by legendary high-end label Telarc--produced & recorded by Jack Renner and/or Michael Bishop--are some of the most stunning recordings in terms of sprawling size and dynamic impact. They rely on the use of simple, time-tested multi-microphone techniques (similar to the Decca Records Tree), which in the hands of these experts have consistently produced noteworthy albums of the highest sonic order for more than 35 plus years. So, with a compilation of great seaworthy film music, as in Master & Commander, it quickly propels one into a watery space that, heard through the Elora Evo, is both real in size and completely immersive and tactile from each instrumental contribution. The pinpoint imaging that comes across from these little speakers is simply outstanding; and in no way would I have necessarily expected this level of holographic descriptive detail to be projected in all directions of my listening room this easily. Oscar Peterson is one of the best-known jazz pianists not just because his music swings as his fingers tickle the ivories, but also because his range of expression through his music and instrument are wonderfully vivid and wide ranging--drawing one into his circle of fifths. And on display in the quintessential Telarc album Oscar In Paris: Live at the Salle Pleyel are some magical tunes like "Kelly's Blues," which leads off Disc 2 with a classic Chicago-style riff reminiscent of the stuff played by The Blues Brothers Band. The softness of the hi-hat attack that accompanies the band in this first number, combined with the detailed, three-dimensionally rich audio capture, leap out of the Waterfall Elora Evo speakers in ways that are at once thrilling, realistic, dynamic, and also subtle. And, dare I say it, better perhaps than the more expensive Waterfall Audio Victoria.

Switching to a completely different jazz recording in order to compare how the Elora Evo conveys details like space, size, timbre, etc., I spun up my 96/24 copy of McCoy Tyner's Nights of Ballads & Blues. his third album on Impulse Records--and a completely different sounding recording (from 1963), since it was made at Van Gelder Studio in Englewood Cliffs, New Jersey, and not at a live club in Paris. "Satin Doll" has a basic trio centering around the piano, with drum and standing bass accompaniment. Instantly, one can distinguish the two totally different jazz recordings because the recording space is totally different sounding, with the Van Gelder Studio sounding much darker, smaller, and less specific than the Salle Pleyel in Paris, which is brighter, larger, and made of different materials from left to right soundstage (along with added tables and people) that respond very differently acoustically.

• The design language of the Waterfall Audio Elora Evo is gorgeous. In some ways images don't do them justice. When you think fit and finish, think at the level of the likes of B&O.

• The Elora Evos are easy to set up.

• The rugged yet elegant glass used in the speakers was developed in part with automotive manufacturer Porsche. If you are going to bare all of your audio designs in a clear speaker, you want some finely crafted glass and Waterfall has surely found a wonderful partner in Porsche.

• The Waterfall Audio Elora Evos match well with today's modern flat UHD TVs but can also beam when given some room from the back wall to breathe. People who invest in Waterfall Audio will be drawn to the look first, most likely, but the sound is sneakily good.

• There aren't many dealers for Waterfall Audio yet, thus they aren't easy to demo, although a few have joined on in 2018 and they are worth a road trip to a dealer or the expense of shipping to audition them in your home. Just know, a product this specialized isn't going to be sold at Best Buy. Waterfall Audio is something special that you have to seek out.

• As much as the clear cabinet look appeals to my aesthetic, it won't be for everyone. Waterfall Audio is without question a niche product for specific décors.

Comparison and Competition
Bowers & Wilkins' 705 S2s come to mind, as they have a sleek, modern look, cutting edge drivers, and excellent performance. They are easier to find in stores, as they are sold in the United States by Best Buy (Magnolia).


In sticking with the French theme, Focal's ARIA speakers have a number of products in and around the $2,000 to $3,000 price range that, like the Waterfall Audio products, come with a gorgeous fit and finish as well as top-notch drivers and crossovers.

Any number of products from B&O come to mind, but there is no one specific product that you'd put up to the direct challenge.

Although physically (somewhat) clear for a whole other reason (they are electrostatic panels) products like MartinLogan's EFX speakers at about $3,100 per pair also might be in consideration at these price points.

Conclusion
$2,800 per pair isn't inexpensive by any means but it also isn't in the audiophile stratosphere either. The Waterfall Audio Elora Evo speakers give you the whole package, in that rock music has beat and power, classical sounds subtle and spatially dynamic, jazz is cool and warm all at the same time, and film / streaming concerts / video games will knock your socks off with a clear, precise soundstage that is a pleasure to experience.

Waterfall Audio isn't a brand that's in every stereo store in America (yet), but they've got something very special going here. I spent six months testing these speakers and just fell in love. I think at their price, they are top performers. Their design language is sexy and they are a pretty solid value. Get Waterfall Audio on your audiophile radar screen if you are in the market for a top performing $2,800 pair of speakers or even something a little more expensive. They are that good.

You'll automatically be entered in the HTR Sweepstakes, and get the hottest audio deals directly in your inbox.
Author
Jeremy R. Kipnis
HomeTheaterReview Product Rating
Value:
Performance:
Overall Rating:
When you buy through links on our site, we may earn an affiliate commission. Your support is greatly appreciated!