WAVAC could very well be called "WAY BACK" by its industrial design. Packing 15 whole watts of tubey power - this amp is just what the audiophiles in Asia long for. Is this the right audiophile amp for you? Ken Kessler takes a long look here. 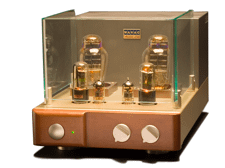 Technoids: skip this page immediately. Wavac is firmly, resolutely of the flakey, specs-are-bollocks school of amplifier design. And besides, you won't miss two page in this issue because you really do hate those little 15-watters using rare, probably forgotten, often single-purpose valves, don't you? You simply despise all of that mysterioso-Japanese-valve-guru stuff, eh? You long for the days when everyone had a Quad 33/303, and a pension from the government actually meant something. I gotta admit that I, too, have a deep suspicion of the 300B cult, and - because I think horns suck - I have difficulty dealing with sub-30W/ch amps. But, hey, I'm a mid-band kinda guy, and that alluring sweetness in the voice region sets my heart aflutter. More to the point, Wavac amps are so gorgeous that you'd swear an Italian must have once cut a swathe through the women of Yamagata.

Wavac, alas, calls to mind £15,000-plus audio jewellery, precisely the sort of goodies which bring out the worst in the mean, envy-riddled British anorak. I, for one, have had my fill of hate mail from killjoys who aspire to the lowest common denominator. But, to paraphrase Wilde, I can resist everything bar temptation, and I wasn't going to say "NO" to an offer from Wollaton Audio to play with even the smallest Wavac, regardless of the repercussions. At £2500, the brickbats which will be thrown at me for reviewing something above the £299 glass ceiling should be smaller than the ones being readied for the assault after the Trilogy RC211. Better still, it's an integrated amplifier, so the

Italianism applies to more than the aesthetics, however. The MD-811's layout reminded me of Unison Research integrateds, with a shallow, vertical, wooden control panel, valves positioned in the open on a flat shelf and transformers in a housing at the back - like a mountain range behind a plain, this time Fuji instead of the Alps. Maybe it's some symbolic, Japanese, let's-honour-nature kinda thing. The wholly-Wavac aesthetic details are what cause palpitations in audiophiles at hi-fi shows who see this stuff and wonder why all hi-fi gear can't be as pretty. That back box covering the custom-made transformers is beautifully painted in a crackle-finish charcoal grey, while the entire main chassis is in finely-textured matt gold. The front panel is available in a choice of woods to special order, and it sports only three controls: a huge on/off button with great "feel", and two rotaries with triangular front sections for volume and source select. The unit is compact, as well, at only 10.5x16.5x8in (WDH); it weighs a manageable 37.5lb.

Clean, too, is the back: IEC mains input, three pairs of solid, gold-plated inputs, and two pairs of gold binding posts. As you can see, this unit is almost comically minimalist: no tape loop, just three line sources, no balance, no remote, no mute - purism taken as far as it goes. But it's purism with luxury, for Wavac has a design signature which makes it stand out from the crowd, a fillip which is probably copied all over Japan by Wavac wannabees: curved glass panels to protect the valves. One look, and you know it's a Wavac, much in the manner of no-nonsense meters crying, "Nagra!" But I have to admit to a small shock: the glass just rests there on its little feet; it's not fixed in place. There but for the grace of God does it remain intact, for I took the unit out of the carton not knowing the glass was loose. But I lifted it out with the front facing me, the glass resting against my ample gut. I'm still recovering from thoughts of how it might have slipped off, shattering on the floor.

Thank goodness for the Wavac's Achilles' Heel: every unit should demonstrate one example of sheer stupidity lest we think the designers made something truly perfect. Oh, and the "MD" stands for "Music Dandy", which is too ludicrous even to consider.

Although I am at odds with the 300B cult, I state with awe and respect that you're buying into a legend with Wavac, just as the Croft lets you sample Glenn's genius, or in the manner of older Audio Note amps connecting you to Kondo-san. In this case, it's the heritage of the late and sorely-missed Nobu Shishido, a valve shogun admired the world over. His formula? Adamantly single-ended, with a passion for the fruits of RCA when RCA (like the BBC) had a vast, creative research department which influenced the world of electronics. When RCA valves were radical, ground-breaking. And just plain cool.

Read more about the WAVAC amp on Page 2.

Thus, like every amp in the Wavac range up to the 31,250-per-pair HE-833, the humble MD-811 is single-ended and employs Shishido's proprietary IITC interstage transformer coupling circuit. Its per-channel valve complement is made up of one 811 transmitter triode, with the front end consisting of a General Electric 6Y6GT and a Philips 5814. The valves are fitted to custom-made porcelain valve bases mounted on elastic supports to minimise microphony; even the anode cap attached to the 811 is porcelain. It screams luxury - you can only marvel at how such a classically simple and plain device can have so much over which to ponder, wonder and enthuse. Then again, this comes from the land of bonsai.

Although specifications are meaningless once you enter into the realm of oddball tubes and arcane circuitry and the kind of power bettered by any respectable boom box, Wavac does describe the MD-811 as delivering 15W/ch over a 30-50kHz frequency range. Input sensitivity is 2V, and input impedance 100k ohms, and the S/N ratio is 75dB. The review unit arrived in 8 ohm form, though 4 and 16 ohm settings are optional. And it speaks volumes for the driving ability of this amplifier that it coped with Wilson WATT Puppy System 6 - a 4 ohm load with peculiarities - without self-immolating. It almost went loud enough to rock. With reservations down below, that is.

In the absence of horns, and wanting to check the range of its capabilities, I also used BBC LS3/5As, old and new Quad ESLs, Martin Logan Scripts and - foolishily - attempted to drive the hungry Avalon Avatars. Big mistake. What quickly emerged is that, while all the SET cultists have been chasing horns, they could be wallowing in the bliss of, say, electrostatics. But who am I to suggest that they swap the aggravating, piercing top end, the mid-band nasality and the low-end honk of horns for the transparency, airiness, speed, openness, warmth and clarity of ESLs? How dare I try to suggest to a masochist that there are alternatives to pain? For it was only by experiencing the Wavacs through real speakers that I could appreciate its main strength: what goes on in the middle.

Categorically, this is not the amp to consider if the your musical preferences are concentrated on that which is found below 80Hz. After auditioning this side by side with bass-masters like the Trilogy RC211 monoblock and the Krell FPB600, you realise just how soggy and limp small valve amps can sound. Which immediately leads you to the sensible conclusion that maybe this amp is crying out for the natural high pass filtering of a small monitor. If you can address that one constraint, then you're in for a treat.

However much we believe in our heart of hearts that all systems should work well with all kinds of music, however much we fear a reversion to those days when the lizards in hi-fi stores could sell you a "jazz system" or a "classical system" or a "rock system", there are, alas, instances when it does apply. Undeniably, the MD-811 excelled with primarily unplugged material like the blues of Keb' Mo' or Eric Bibb, a cappella vocals from the Persuasions and the Mint Juleps, and even some orchestral; much of the power from soundtracks such as

It just will not rise to the sledge-hammer occasion, no matter how much you help it along. I fed the Wavac with the Krell KPS25sc, not a shy source component. I used short cable runs, tried all four of my mains rings, speakers with impedances ranging from 4-15 ohms, and sensitivities as high as 94dB/1W. If you wish to anthropomorphise this amplifier, it is Gwyneth Paltrow, not Bette Midler, a geisha rather than Maggie Thatcher.

Within these bounds, though, it delivers magic moments in abundance. The way it separates the Persuasions' or the Judds' voices, its absolute freedom from sibilance, and the detail in every textures will have you reaching for a wide array of vocalists with which to challenge it. From Nat "King" Cole to Neil Young, it respects every vocal type. And for instruments - you want to hear the difference between Ovation and Martin acoustics? A Steinway and a Yamaha? Any musician can hear that, even if it's a crappy cassette played through a Walkman. Now, mere mortals can, too.

Never equate a small amp with a small sound or soundstage. The wee Wavac copes with large vistas, and can resolve the air between instruments. There is no better test than the original Vanguard pre-recorded open-reel of

I admit to much puzzle
ment over the years, as colleague after colleague in the USA would rave to me about the magic of Shishido amplifiers. Now that I've sampled it, I can only come up with one thought: if this is what he did with a humble 15-watter at a sensible price, then, please, keep me away from the top of the line. I already have enough on my wants list to bankrupt a small nation.