Andrew Robinson evaluated the performance of the Western Digital My Book Live 1 TB networked drive. The unit was simple and easy to operate, but perhaps it was a little too simple. 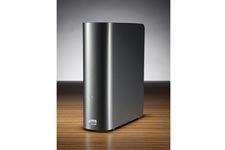 It's safe to say, is it not, that digital music, movie and image files are here to stay. The proliferation of iTunes, AmazonVOD and other services like them do little to quash the notion that we're on a crash course with a future void of physical media. With no more little plastic discs taking up valuable real estate or, worse, becoming damaged to the point of being unusable, any media enthusiast -regardless of what that media is -needs to begin looking at their beloved collections not in the physical sense but in terms of raw data, data that will inevitably have to be stored, accessed and enjoyed as if it were still contained on a disc. What I'm describing is nothing new. In fact, it's a concept that has been with us since the advent of the iPod. However, an iPod is focused on portability and convenience, whereas your treasured two-channel or home theater system isn't. For those systems, one needs to consider some sort of media server, one with a user-friendly front end and a varying degree of storage: i.e., hard drive space.

There are a number of front-end solutions for one's music and movies, some ranging in price from affordable to, "Are you out of your mind?" All have a dependency upon hard drives, which means it'll either be internal or part of what is commonly referred to as Network Attached Storage, or NAS. The My Book Live from Western Digital is the latter of those two options. The My Book Live endeavors to take the guesswork out of NAS by making it largely plug and play, not to mention both PC- and Mac-compatible. The My Book Live series of hard drives can be had in 1TB on up to 3TB, with retail prices starting at $179 for a 1TB NAS drive (though street prices are often much lower).

According to Western Digital, a 1TB NAS drive will hold up to 76 hours of standard-definition video footage or 250,000 MP3s at 128kbps or 200,000 high-resolution JPG image files. Obviously, you can mix and match to your heart's content. A single-terabyte drive like the 1TB My Book Live will hold a considerable amount of data - unless of course you want to dive into streaming HD content, in which case 1TB isn't nearly enough. What makes the My Book Live special is its network-attached connection option, which comes by way of a Gigabit Ethernet connection. This is also the only way you can connect to and/or transfer data to the My Book Live, so you'll want to make sure you have a network router that is up to snuff. Otherwise, a lot of what you're paying for is going to be thrown out the window. The My Book Live is capable of 100 MB/s reads, which is good enough for full HD video streaming, complete with lossless audio formats, such as Dolby TrueHD and DTS-HD Master Audio. It's even good enough for streaming 3D HD content. Beyond its storage capability and data transfer rate, the My Book Live is PC- and Mac-compatible, as well as dlna-certified. Most modern Mac operating systems are supported, as are Windows OS. Supported Internet browsers include Internet Explorer 7.0 or higher, Safari 4.0 or higher and Firefox 3.6 or higher.

As far as its physical dimensions are concerned, the My Book Live is virtually indistinguishable from other WD desktop hard drives, measuring six-and-a-half inches tall by five-and-a-half inches deep and two inches wide. It weighs a respectable two-and-a-half pounds. The drive itself is encased in a matte black housing that features no physical controls of any kind. Instead, there is an AC power receptacle and an Ethernet port located along its back panel.

Integrating the My Book Live into one's system is largely plug and play, though you'll probably want to do it manually to ensure proper file management. When I connected it to my non-Gigabit router, which serves my Mac Pro tower, my OS immediately recognized the drive, but also created a host of "ghost" folders and backup copies that I didn't discover until I connected the same drive to my PC network. This may not sound like an altogether bad thing, except for the fact that when you point network attached devices, such as my Dune-HD player and/or Panasonic plasma, to the drive, it didn't always read the right folder automatically. For those using meta data-scraping software, like MyMovies or Zappiti, this is a huge problem. If you're an all-Mac household and don't want to be bothered with such file management, then all you'll have to worry about is where to place the My Book Live in your home office. For those who prefer to exercise absolute control over where and how your media is stored, I suggest connecting the My Book Live to your PC first and setting it up that way. Once properly set up, you can then point whatever OS you want at it with little drama.

In terms of performance, you're going to want to connect the My Book Live to your home network via a Gigabit capable router, which in my case was a Netgear N600 Dual Band Wireless Gigabit Router (WNDR3700). There are a number of Gigabit-enabled routers for sale for under $200, so finding one that suits your needs shouldn't be to big an issue. The My Book Live will work on a lesser-speed router, though if you wish to take full advantage of its potential, you'll want to pair it with the best. Via my Netgear router, I was able to stream music and movie files to my Dune-HD Max player with zero drama. This included HD content in full 1920 by 1080p resolution, complete with lossless audio codecs. In fact, the time it took between hitting play and the HD picture appearing on screen was less than five seconds via the MyBook Live feeding my Dune-HD Max player with the Netgear Gigabit router between them. Repeating this test on more than 50 hours of HD content produced zero hiccups. It was only when I attempted to stream HD content off the My Book Live drive, while also uploading HD content to it, that I made the drive stumble. As for the quality of the image and/or sound, it's all data, and therefore solely dependent upon how you ripped said content originally, which in my case was always bit-for-bit.

Read about the high points and low points of the My Book Live on Page 2.

High Points
• The My Book Live drive is an easy way to get
into network attached storage solutions without having to have a great
deal of a) money and b) knowledge.
• The My Book Live can be had in
three different varieties, ranging from 1TB on up to 3TB, which is going
to be enough for many users. For those with modest movie collections or
a need to only stream music and perhaps photos, the 1TB My Book Live
drive should fit the bill nicely.
• The My Book Live is a
straightforward and easy-to-use network attached storage device that is
both Mac- and PC-compatible, though I suggest setting it up with a PC to
avoid any file management headaches down the road.
• The My Book
Live drive via its Gigabit Ethernet port is fast enough to stream full
HD content, complete with uncompressed audio codecs, though getting said
content onto the drive is up to you.

Competition and Comparisons
Discussing
hard drives and the like is a new thing for this publication, as well
as for this reviewer, though I'm confident it's a segment of the market
we'll be diving into more and more as we move ever closer to the death
of physical media. That being said, there are numerous network attached
storage drives and/or solution out there that match or exceed the
capabilities provided by the My Book Live. The My Book Live is clearly
aimed at the novice user, one who doesn't wish to be bothered with
complex file management protocols and/or network setups. For those
looking for something a bit more robust or at the very least
upgradeable, there's iOmega, Buffalo and Drobo, to name a few. All of
the aforementioned brands (except Drobo) offer self-contained options,
as well as NAS devices that you can populate with any number of hot
swappable hard drives of your choosing. Keep in mind, prices do go up as
you increase your ability to customize.

Conclusion
For those
of you who may be new to the concept of network attached storage or
have a modest collection of media that you wish to make available to a
host of network-enabled devices, the My Book Live is a great way to get
one's feet wet. It's limited by its capacity, though it can be had in
sizes up to 3TB, though at that size I would recommend getting something
more along the lines of a Drobo, for it will allow you to grow beyond
3TB should you this be what you need. Still, for the uninitiated, the My
Book Live is a solid go-to NAS drive, provided you also have a
Gigabit-enabled router to insure maximum performance.