In this era of streaming media, is it worth the cost to buy a Blu-ray disc? If that disc comes from Disney/Pixar and you've got kids in the house, Jerry Del Colliano says the answer is a definitive yes. 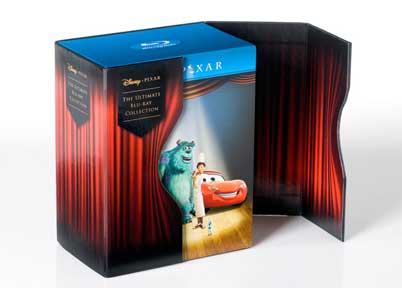 I guess it took me becoming a parent to finally realize the true phenomenon of Disney/Pixar movies. It may not be a popular parenting move to use your home theater as your babysitter, but reality states that, if you are on kid-duty all day, some form of screen time is likely going to happen to give you, the adult, time to check your phone, email, etc. No content material buys you more email-phone-Daddy-time than a Disney/Pixar movie. TV shows like the Octonauts, Blaze and the Monster Machines, Paw Patrol, and SpongeBob Squarepants are good, but none of them compete with the power of a Disney/Pixar movie.

Some people complain about the above-average cost of these discs, and they are a little over market price compared with a traditional Blu-ray disc on Amazon.com, but who cares? If you have little ones at home, Disney/Pixar movies will get played more than any other movies you buy, and they usually make for a fantastic home theater demo, to boot.

How often do you watch a movie that you've purchased on disc? I've watched my favorite movies--like Goodfellas, The Godfather and The Godfather Part 2 (I disown the third one), Fletch, and Caddyshack--many times, but it doesn't come close to the number of times I've listened to Electric Ladyland, the first five Led Zeppelin records, a handful of the best Yes records, and Pink Floyd's mid-to-later catalog. You can see how $11.99 for a CD is a bargain compared with even the best films on Blu-ray. But when it comes to those Disney/Pixar movies, well, they are just as indispensible to my kid as Electric Ladyland is to me. We've watched Planes 2 (Fire and Rescue) at least 10 times in the last month. Beyond the obvious entertainment value for a three-year-old, the movie has also sparked conversations about planes, what they do, how they work, and beyond. It has even inspired a Daddy-son trip to the Santa Monica Airpark to watch planes take off and land. And respectfully, Planes 2 is a stiff compared with Finding Nemo, Cars, Cars 2, Toy Story, Toy Story 2, and so on. If you ask my son, though, he wouldn't give up any of the movies in the collection.

Disney is a smart company, often going the limited-edition route with its home-video offerings. If you've bought the movie, you are set. If you miss out, God help you. eBay will offer solutions that cost a hell of a lot more than $25 to $40 for a Blu-ray package. Disney also offers a lot of added value to its pricey offerings. You get a lot of bonus content. You get a digital copy for your mobile devices. You often get a DVD version to use in the car or computer. That's a lot of ways to use the content that you've paid for.

If you're just beginning to build your Disney/Pixar library, consider the Disney Pixar Ultimate Blu-ray Collection boxed set for about $150. It's a bargain, trust me. It's got many of the big films like Cars, Monsters Inc., and Wall-E, plus lots of supplemental material. The import boxed set has even more content for about $200, but some people complain that three of the movies don't play on U.S. Blu-ray players because the regions are incorrect.

The fact of the matter is, many of today's kids movies really are fun for the whole family. I think it was Dick Clark who said, "If it ain't in the grooves, it ain't in the grooves." Well, with Disney/Pixar movies, it's in the grooves (or I should say "the zeros and ones"), as they create movies that captivate kids, entertain adults, and represent some of the best demonstration material that you will ever see on your HDTV.

With Ultra HD Blu-ray reportedly coming this fall (I will believe it when I see it, as there was only one prototype player at CES in the Panasonic booth), there is a chance to sell all of these movies all over again. And guess what, even if they want $50 per disc, I plan to step up. If they want to put out a collector's edition boxed set, I know what Santa is bringing my boy Enzo. The content is just that good. The content is just that valuable. As they say in the world of private-jet charter, "How much is your time worth?" Mine isn't worth enough to justify a jet very often these days, but I sure have $50 to spend on Toy Story on Ultra HD Blu-ray. Do you?

Here is a full list of Disney/Pixar movies and the aspect ratio that they were shot in.