What Happens When Your HDTV Finally Dies?

What Happens When Your HDTV Finally Dies?

Eventually, all things die, even televisions. Once your television finally gives in, you have to wonder about what do with it. Do you fix it? If not, how do you go about getting rid of it? Here's a few ideas. 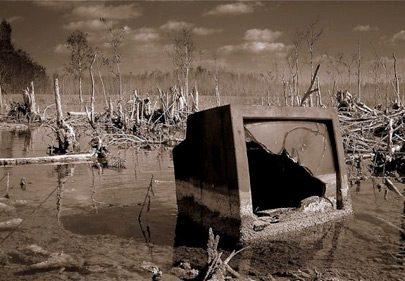 It has happened to me, and I didn't handle the situation correctly. A few years ago, my beloved Panasonic 50-inch pro-model plasma stopped working. Back when we did the installation, we fit the TV and its side-mounted speakers into a niche in the wall so that it had that flush-mounted look. Remember, this was long before the uber-thin form factor you see in today's HDTVs. When the TV went on the fritz, I called up a trusted repair shop near the HomeTheaterReview.com offices in West Los Angeles called George Meyer. These guys came over with a small truck and removed my calibrated $4,500 HDTV from the wall and took it back to their shop to diagnose the problem. The repair was going to cost me about $600, and I said yes.

Saying yes was my mistake. Not only was I forced to go without a TV for about two weeks, but the extra $600 invested in an old 1080i HDTV was a waste, regardless of how well-calibrated it was or how perfectly the speakers fit in the niche. Today's HDTVs are simply better - they are brighter, thinner, more energy-efficient and more features-laden. Fellow audio/video reviewer Geoff Morrison (CNET, Sound + Vision, etc.) mentioned to me in a recent conversation that he was wrapping up a review of the latest mid-priced Panasonic ST Series plasma that outperformed the VT Series from just last year. (By the way, Adrienne Maxwell is reviewing the TC-P60ST60 as I write this, so stay tuned for her impressions.) We both were drooling over the performance specs of Panasonic's new ZT Series plasma (soon to be released and likely to be purchased by me). Simply put, new HDTVs are better in every way. If somebody wants to hang on to a Pioneer KURO for nostalgia's sake or overpay for a used one on Craigslist.com, good for him or her ... but it's a mistake. When an HDTV breaks, replace it. Even many of the cheapie units are really good these days, and the higher-end TVs are even better if you can justify the investment.

To feel better about saying goodbye to your old HDTV, do some simple math. What did you pay for your old set? (Yes, I really spent $4,500 on the old Panny; that's what they cost back then, and that was from the local distributor, not retail.) Then divide it by the number of years you owned it. I spent $4,500 plus $600 to repair the TV, and I sold it for $600 used. So, $4,500 divided into six years equals $750 per year or $62.50 per month. The set had lots of hours on it, so the cost per hour of enjoyment was pretty affordable. All in all, this HDTV not only provided me cutting-edge performance in the day but offered long-term value over its lifespan. Could I have kept it longer? Absolutely, and the amortization of the TV would have given me more and more value - as I'm getting from the identical set in my master bedroom. However, for $2,999, I was able to replace the old TV with a very thin, edge-lit LED from Samsung that was a whopping 15 inches larger and could cover the entire niche that I built. The new set had a 1080p resolution, came loaded with apps like CinemaNow and worked better in a room with more ambient light. The truth was that I needed a new HDTV, not a repair on an old one.

Once you get over the emotional issue of saying bye-bye to your old television, there is a new-school issue to consider: what the hell to do with the old one when you're done with it? You are not being a Sierra Club hippie if you consider the impact of your HDTV in a trash dump. E-waste, as it is called, is a major concern, be it an old printer, used-up batteries, hard drives, old RAM or, most emphatically, old CRT or big-screen HDTVs. The amount of truly poisonous material in your old televisions is scary. Thankfully, a number of recycling options now exist for you and/or your dealer/installer to ensure that you are being a good citizen of the world and disposing of your e-waste correctly. Best Buy has a pretty open-arm policy toward e-waste, as does office retailer Staples. That's a safe place to start for most people who live in the United States. Local fire departments and even schools are starting to have e-waste events where you can bring in your old gear and have it treated properly. Here in Los Angeles, if you are willing to take a drive to the "poop plant" (as I call it) down by LAX, there is a hazardous waste collections area where you can hand over all sorts of crazy solvents, computers, monitors, paint and whatever else you have around your house that isn't healthy to have around your house, to be responsibly recycled. There are guys dressed up in haz-mat suits loading pallets of old Macs and Dell PCs into a Tetris-like stack of Jurassic technology. It looks like a scene out of season two of 24, but I was able to clear a lot of nasty products out of my house at no meaningful cost, knowing that it wasn't going into the dump or the water table. The Consumer Electronics Association has a website, GreenerGadgets.org, where you can search for local recycling centers, among other helpful services.

When the time comes to put your old TV down, know that there are a growing number of ways to do it with minimal impact on the environment. Also, for not too much more money than the cost of a repair, you are going to get a bigger, better, more feature-rich set that, when professionally calibrated, is going to provide years and years of improved performance. It's a good time to be a home theater enthusiast and a video consumer.