What Is Oculus TV and Should You Care?

What Is Oculus TV and Should You Care?

VR is invading our territory now, with the promise of delivering 180-inch equivalent screen sizes. But will it fly with the home theater crowd? 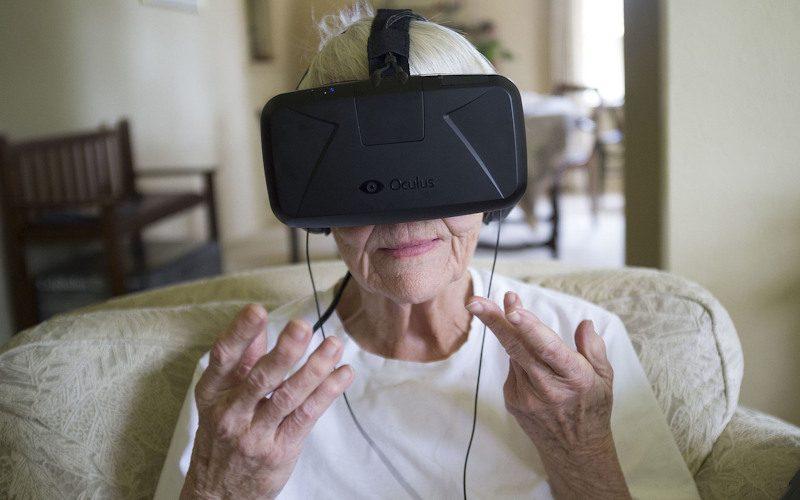 Oculus, for the uninitiated, is a Virtual Reality (VR) headset that promises to give you a truly immersive audio and visual experience, be it for gaming or home entertainment, all at an affordable price. Think of it as a bulky pair of Oakley ski goggles, except that instead of tinting the surrounding light, they completely block out the outside world in favor of a small screen (or screens) that give you the sensation of watching one large 3D screen. Up to this point, Oculus has been largely a gaming or simulation accessory, but recently the company unleashed its newest creation, Oculus TV, and that’s right up our alley.


Oculus TV promises the experience of watching your favorite television and/or movies on what should seem like a 180-inch screen, complete with virtual surround sound via headphones (depending on your Oculus headset the cans may be built-in). At first glance, there isn’t anything inherently unique about Oculus’ interface, in that it appears much like the streaming menus and GUIs you’re used to seeing on many of today’s smart TVs. The content is largely streaming-based, with stalwarts like YouTube and such on tap. What makes Oculus TV interesting is its promise of a big, immersive experience for very little money and less gear. The “less gear” argument is likely going to appeal to Millennials, though to date I have yet to see anyone of any age–outside of the gaming community–sporting an Oculus headset. So, while younger viewers may be more apt to watch content on their phones or laptops, the jury is still out on whether or not they’ll adopt viewing goggles like Oculus.

Oculus TV is obviously a first-generation go at what I can only assume is an evolving platform that will likely improve and expand with time. As it sits right now, Oculus TV isn’t quite up to par with even today’s modest HD and UHD displays in terms of visual quality. Is the virtual picture big? Sure, but it’s by no means as impressive as say sitting down to Sony’s latest crop of OLED displays or Samsung’s brighter-than-the-sun Quantum Dot Color Q9F, even at sizes far smaller than the Oculus-promised 180 inches. And as far as the sound is concerned, well that is largely dependent upon your Oculus’ built-in headphones or whatever aftermarket headphones you choose to bring to the party. Adding other headphones greatly improves the audio experience with Oculus, but boy does it ruin the simplicity factor.

But in time, could the concept of the Oculus TV spell the end of flat panel displays and giant home theaters as we know them? In a word. No. In two words, hell no. Not to say that the Oculus TV isn’t cool, but the notion of someone wearing viewing goggles for non-interactive content, either alone or in group, seems about as likely to fly with the general public as 3D TV did.

I know people on a whole seem to prefer virtual and/or online experiences to that of real, true human interactions these days, but a family of four cozied up on the couch all staring into their own pair of oversized VR ski goggles? Not gonna happen. And I don’t care how good or immersive the experience is. The concept of putting on clunky goggles to experience a virtual world has been with us in television and movies for going on 30 years and yet despite its familiarity it’s still not a concept that consumers widely embrace.

Does that mean the tech behind Oculus TV without merit? No. Not even a little bit. While I do not think consumers are willing to watch their favorite content en masse with goggles, I do think in time we’ll want an Oculus-like experience on our existing eyewear or contacts, which is absolutely coming. Even if we’re able to get that big screen commercial cinema experience via a pair of contact lenses, will we adopt it and forego sitting in a darkened room with strangers? No. While I can think of a few instances where a virtual theater experience could be or would be preferable, when you get right down to it one cannot ignore the communal experience that is going to the movies.

This is the fundamental problem with Oculus TV or Oculus in general as it pertains to the non-gaming home entertainment experience–it takes the home aspect out of the equation and replaces it with isolation. What makes a home a home is the experience you fill it with, be it with your own family or with friends. What makes a home theater worthwhile isn’t the gear or bragging rights–it’s the experience of sharing in your favorite content with the ones you love. This is what Oculus TV gets wrong and why VR-style goggles on a whole haven’t really broken out beyond gaming, because much of today’s best content is intended to be watched and enjoyed with others.