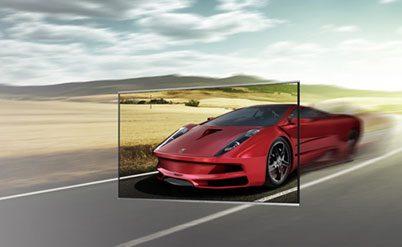 Education, Feature News Stories
Published On: January 12, 2015
We May Earn From Some Purchases Via Affiliate Links

Love it or hate it, the Soap Opera Effect is a reality in many of today's top HDTVs. Adrienne Maxwell explains what it is, where it came from, and how to make it go away (if you want).

A reader recently commented that he would never buy a 4K LED/LCD television because of the Soap Opera Effect and that he hoped 4K OLED would become more affordable soon to get away from it. The bad news for that reader is this: OLEDs can suffer from the Soap Opera Effect, too. So can plasmas, for that matter. The good news? There’s no reason to endure the Soap Opera Effect if you don’t like it. You can turn it off, although you may have to accept some other performance compromises if you do.

What are we talking about? The Soap Opera Effect is actually a popular nickname for the motion smoothing function found in many modern HDTVs. Some of the more official-sounding names for this function are motion interpolation, frame interpolation, or motion estimation/motion compensation (MEMC). They all describe the same thing: that super-smooth effect that makes film sources look like video on your TV. The nickname stems from the fact that daytime soap operas are generally shot on video instead of film, so these shows have a distinctly different quality of motion than the movies and TV shows you see during primetime, which are usually shot on film. (I’d be remiss if I didn’t mention that most daytime soap operas have gone the way of the dinosaur, so this nickname may have to do the same very soon…or no one will understand the reference.)

Why do film and video sources look different on your TV? Because, generally (The Hobbit notwithstanding), film is shot at 24 frames per second, and video is shot at 30 frames per second. To show 30fps video on a 60Hz TV (which shows 60 images per second) requires a simple doubling of the number of frames. To show 24fps film on a 60Hz TV requires a process called 3:2 or 2:3 pulldown. The first film frame is shown twice, the second is shown three times, the third is shown twice, the fourth three times, and so on. This 3:2 process creates what is called judder, which is a slight stuttering quality in the film motion that’s especially evident in slow camera pans.

For those of us who grew up on 60Hz TVs, this is simply how films have always looked when shown on television. Then along came the 120Hz (and beyond) TV. In order to deal with the motion-blur issues that are common to LCD TVs, the manufacturers began upping the LCD TV’s refresh rate, showing 120 or 240 frames per second. Check out this article for an explanation on why a higher refresh rate can help reduce motion blur. Different manufacturers employ different methods to add these extra frames; even within the same TV, different methods may be available. One method is simply to repeat frames; another is to insert black frames, which can be very effective in reducing motion blur but also dims the picture.

And finally comes motion or frame interpolation, in which the TV looks at two existing frames and creates an entirely new frame in between them by guessing or estimating what should be there. This process reduces blur, and it also reduces or eliminates the judder in film sources. Video-based sources don’t have judder, so their quality of motion doesn’t look any different. That’s why a Sunday afternoon football game looks perfectly normal on your 240Hz TV, but the film-based primetime drama that comes on after it has this strangely smooth quality.

I say strange because I (along with most every video reviewer I know) do not like the Soap Opera Effect. I’m used to seeing film judder on TV, and it does not bother me at all. I find the smoothing effect to be very distracting, disorienting, and, on a really big screen, almost nauseating. But you know what? A lot of people like it…so much so that plasma manufacturers began adding a smoothing mode to their TVs, even though motion blur was never a concern in plasma. And guess what, the first crop of OLED TVs from Samsung and LG include it, too. Soap Opera Effect is no longer just an LCD thing…it is an option on a great many TVs and projectors on the market.

The key word is option. Every major TV and projector manufacturer that I can think of allows you to turn off the smoothing function if you don’t like it. Yes, it is on by default in most TV picture modes, which is why you see it everywhere: on the retail floor, at the local bar, on your friend’s TV. If you’ve bought an LED/LCD TV in recent years that has a higher refresh rate and you did nothing but switch it on and leave it exactly as is, you’re probably watching the Soap Opera Effect right now. If you switched to the THX or Pro picture mode, then motion interpolation is probably turned off by default. We usually encourage people to at least switch their TV to the Cinema or Movie picture mode, but even there, motion interpolation is usually on by default.

If you like it, great. If you don’t, just turn it off…but here’s the catch for LED/LCD owners. Remember that the Soap Opera Effect was born from a need to reduce motion blur. Depending on the manufacturer, disabling motion interpolation may mean disabling blur reduction, too. Some people (like me) are not sensitive to motion blur at all. I seldom notice it, and when I do, it doesn’t bother me. Other people I know are very sensitive to it; and, since plasma is essentially dead and OLED is insanely expensive, these people need blur reduction in an LED/LCD TV. What do you do if you hate the Soap Opera Effect but are sensitive to motion blur?

The answer is, choose your LED/LCD TV carefully and take the time to adjust your settings to get the picture quality you want. Every manufacturer has a special name for its motion-blur control in the setup menu. Samsung calls it Auto Motion Plus, Sony calls it Motionflow, LG calls it TruMotion, Panasonic calls it Motion Picture Setting, etc. Certain manufacturers like Samsung, Sony, and LG offer a variety of blur-reduction options: some of them use motion interpolation, and some of them use frame repetition and/or black-frame insertion. So you can choose a mode that reduces blur but keeps the film judder. Vizio, Panasonic, and JVC only offer blur reduction modes that use motion interpolation, so you can’t get one without the other.

Sometimes the blur-reduction options depend on the price level of the TV. Some companies may give you limited blur-reduction options in their lower-priced TVs but more choices at the higher end. A quick rule of thumb is this: If you look at the motion-blur settings in the menu, and the only choices are low, medium, and high or standard and smooth, chances are good that blur reduction and motion interpolation are inseparable. The low or standard mode should be subtler in its smoothing effect, but it’s still there. If that setup menu has a custom mode with separate blur and judder controls or it has modes called Clear or Impulse, then you’re on the right track.

Since I sympathize with all haters of the Soap Opera Effect, I’ve tried to make your research a little easier by assembling the following chart–which provides the name of each LED/LCD manufacturer’s motion-blur control and the name of any mode within that control that does not use motion interpolation. Happy hunting. 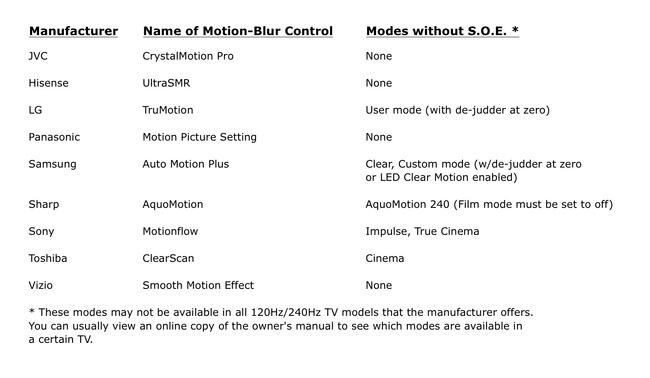 What do you think of the Soap Opera Effect? How about motion blur? Are you sensitive to it or not? Let us know in the Comment section below?

Additional Resources
• How to Choose the Right LCD TV at HomeTheaterReview.com.
• Learn more about a TV’s refresh rate here.

You'll automatically be entered in the HTR Sweepstakes, and get the hottest audio deals directly in your inbox.
Subscribe
Connect withD
Login
Connect withD
2 Comments
Oldest
Newest Most Voted
Inline Feedbacks
View all comments
This is the static ad content. This is just a placeholder for now to get things styled.
Visit Website