What the AV Industry Could Learn from a Silly Bedding Company

What the AV Industry Could Learn from a Silly Bedding Company

The AV industry could get a serious boost if more manufacturers had half the personality of Sheets & Giggles. 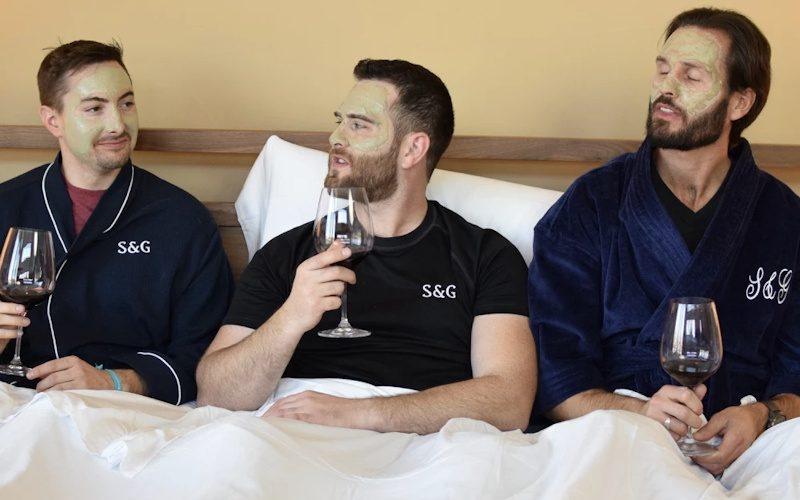 We at HomeTheaterReview.com spend a lot of dwelling on traditional AV retailers, and what we think they could do better to adapt to the new retail landscape caused in part by online shopping and changing demographics.

This isn't another such story, though. And it's not such a story because it occurred to me this past week that the retail experience is simply one of the things holding the home theater and high-end audio industry back these days. A far bigger problem is far too many of the manufacturers themselves, and their complete and utter lack of brand identity or personality. And if you'll allow me a lengthy diversion in the world of bedding, I'll explain why that's important.

My wife and I like Champagne bedsheets despite our beer budget. Years ago, one of my aunts gave us a set of super-swanky, high-end, long-staple cotton sheets from luxury bedding manufacturer Peacock Alley, and we've never since settled for anything less. Mind you, we can't afford $800 for a new set of sheets, like, ever, especially given that we share our bed with an 80-pound pit bull who's an enthusiastic snuggler and wallow-monkey. But as it turns out, you can get those $800 sheets for more like $90 at Tuesday Morning if you're patient enough and don't mind buying discontinued lines or factory seconds. Which we don't.

Last winter, though, instead of buying our normal percale weave, we accidentally bought sateen sheets, which are slicker and softer than hot-buttered sex, but which trap heat like 400ppm CO2 once the mercury heads north of 80 degrees. Long story short, we needed some new summer sheets. And our local Tuesday Morning was all out of percale offerings in our preferred brand. So, I turned my attention online. And it didn't take much time on Google to bump into a newish company called Sheets & Giggles, which immediately stood out due to its cheeky use of puns, its irreverence, and its blatant winking hyperbole. I was immediately amused. The more I read, though, the less interested I got, simply due to the fact that Sheets & Giggles makes its products from eucalyptus, and I'm a long-staple cotton hardliner.

That's when I noticed the second noteworthy thing that Sheets & Giggles does as a brand: it anticipates objections of this sort and addresses them, right up front. Unlike most recovered or regenerated fibers, the eucalyptus lyocell used by S&G is eco-friendly. And although their sheets are sateen weave, they're breathable and perfect for hot sleepers and hot climates. I could go on and on, but the bottom line is that for every objection I raised, Sheets & Giggles had a response.

Sheets & Giggles™ – Stand Out. Sleep In.

The third thing that kept me on the hook was the company's transparency. Despite all its upsides, lyocell can be more difficult to launder than cotton. The company's website doesn't try to hide that, but rather turns it into a joke. Frankly, a stray thought did pass my mind that everything about the company might be one big joke that I just wasn't in on. It rather calls to mind a modern-day version of Crazy People.

Crazy People, The Freak It Will Seriously Fuck You Up

But with more checkmarks in the pro column than cons, and given that I had a coupon, I figured, "what the hell?" I had already gotten a hundred bucks worth of quality entertainment out of the FAQ alone. So, I pulled the trigger. And when my shipment arrived, it took all of thirty seconds for me to decide that Sheets & Giggles had a new customer for life.

packaging is luxurious--far above what you'd expect from the mid-market price of their product. Their sheets also came with a reusable bag that I now use for grocery shopping. They even include a little gift with each shipment (in my case, a free sleep mask that my wife promptly stole). As for the quality of the sheets themselves? Well, this isn't an ad for Sheets & Giggles (I mean, except for that whole buy-it-now link on the side of the page). And you shouldn't put much stock in my opinion of them, since I'm not a professional bedding reviewer. But I have to say, they're way softer and way more breathable than the luxury linens the missus and I have grown accustomed to. In short, they're exactly what I wanted even if I didn't know I wanted it.

And honestly, that's much more important than a cheeky image and a fantastic social media presence. But without that impudent marketing, I never would have stumbled upon this company in the first place. And I probably would have already forgotten their brand name. Which got me thinking: how many AV companies have anything approaching this sort of brand personality? And I don't mean the exact breed of audacious silliness that Sheets & Giggles exudes; I simply mean any form of personality at all?


Schiit Audio certainly flirts with the idea, what with their equally punny name and their appropriation of Norse mythology. But Schiit surprisingly has next to no social media presence. The company does little that I can see to exploit what it's got going for it--which is a lot. If I ran Schiit or its marketing team, I would be all over the release of every Marvel movie with Thor in it, geeking out and memeing all over Facebook and Twitter. I would have hashtagged #ThorLebowski until my fingers bled. Instead of slick, black backgrounds, the Schiit website would be all hammers and swords and axes and chainmail. Hell, I might even hire a band to write a thinly-veiled rip-off of Zeppelin's "The Immigrant Song" to play in the background of the homepage, the same way Sonos whacks you over the head with hipster Sub Pop darlings on its own website. And hey, that may not jibe with your notional of a respectable AV brand. But admit this: you certainly wouldn't forget it. And look, I don't mean to pick on Schiit here. The fact of the matter is that the company has about a thousand times more personality than nearly any of its competitors. But that's the problem. Our industry, when you get right down to it, is the business of selling toys. Very sophisticated toys, mind you. Often very expensive toys. But toys nonetheless. And yet, how many AV websites have you seen that elicit any sort of fun response? How many of these companies have social media pages that really give you any sort of vibe whatsoever, whether it be entertaining, luxurious, or what have you? How many of these companies do you actually get the sense are talking directly to you?

Granted, the main reasons for this lack of character are pretty obvious. Firstly, it's difficult (though not impossible) to formulate any sort of meaningful identity when you're a gigantic multinational corporation with a Board of Whatevers (although Apple somehow manages it). Secondly, and perhaps more importantly, developing a distinctive brand identity is risky. Do so and you're setting yourself up to turn some people off. When I told my dad about my new sheets, he seemed interested, so I texted him a link to the site. After a few minutes he replied back, "All this silly, sarcastic crap just pisses me off." I get that. I do. I understand why companies might resist the urge to engender that sort of revulsion, even if the thing that turned him off was exactly the thing that drew me in. But in an attempt to play it safe and avoid stepping on any toes or offending any sensibilities, far too many companies in our industry end up not really appealing to anyone other than the already converted. If you get a moment, take a look at Bang & Olufsen's website to see one of the rare exceptions. The first video you stumble upon practically screams, "This is the feeling of a rich and comfortable lifestyle." The company's social media pages drip with snooty style. Simply put, none of it appeals to or resonates with me on a personal level, at all, despite the fact that I quite like the performance of B&O's gear. But that's okay. I respect B&O for at least having a distinctive and identifiable personality and brand image. In fact, I almost respect the company more for putting an unwelcome mat in front of the door that may as well read, "Hey, Dennis, we're not really the brand you're looking for."

Because whether than personality appeals to me or not, I guarantee you more of my normie, non-AV-enthusiast friends of have heard of Bang & Olufsen than Marantz or Audeze or Naim and Bowers & Wilkins combined.

And like it or not, brand recognition of that sort is crucial. Maybe not for you or for me. I assume, given that you're reading this page, performance is your first, second, and third concern, just as it is mine. But once we step outside of our little echo chamber, that sort of thing just doesn't fly. Consumers at large, especially younger ones, don't respond to the sort of "Here's a thing, here's what it does, go buy it" marketing that the AV industry largely relies on. At least not anymore. They want to feel like there's a human being designing, making, and indeed selling the products they buy, even if it was cobbled together by a committee. And they want to know that said imaginary human being's style, ethos, values, and/or personality align with their own, or at least don't conflict. (Want some evidence of this? Wendy's has almost as many followers on Twitter as McDonald's, despite doing a third the sales and having less than half the number of franchise locations. But Wendy's is climbing the sales charts ever year, in part due to the fact that whoever's running the company's marketing and social media acts like an actual human being.) Simply put, consumers don't want to be told why they need something. They want to be given a reason to like it and the company who makes it. And AV manufacturers simply suck at that.

Who am I overlooking, though? Which AV companies actually manage to project something approaching a relatable personality or brand image? Let's give them some love in the comments section. And I'm not merely talking about legendary individual personalities in our industry like Sandy Gross, Nelson Pass, Dan D'Agostino, or Jeremy Burkhardt. I'm talking about the brands they've built, and the image those brands project to people who've never heard of any of these people.

One shiny No Prize goes to the first commenter who can name five such companies, along with a handful of reasons why they come across as more than merely anonymous manufacturers of black boxes.

You'll automatically be entered in the HTR Sweepstakes, and get the hottest audio deals directly in your inbox.
Author
Dennis Burger
When you buy through links on our site, we may earn an affiliate commission. Your support is greatly appreciated!