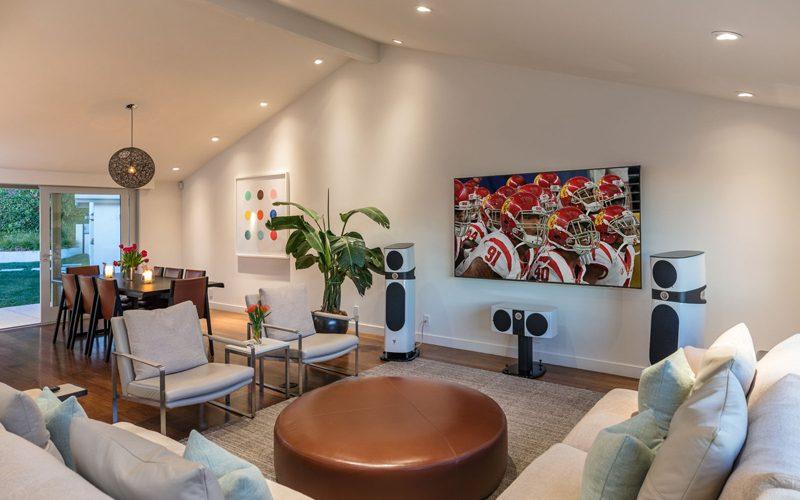 Feature News Stories
Published On: January 6, 2020
We May Earn From Purchases Via Links

Doesn't 2020 sound amazingly futuristic when you say it out loud? Looking back, home theater as a hobby has come a long way since the days when Dolby ProLogic surround and VHS source components drove sales a generation ago. Today's... 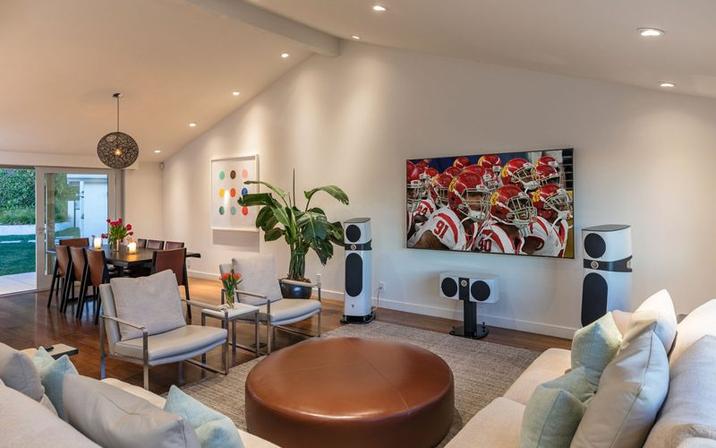 Doesn't 2020 sound amazingly futuristic when you say it out loud? Looking back, home theater as a hobby has come a long way since the days when Dolby ProLogic surround and VHS source components drove sales a generation ago. Today's best home theater systems pack gigantic, ultra-thin, 4K (and some now even 8K) video displays. Object-based surround sound offers us more channels than we ever dreamed possible, and is more discrete and in some ways more impactful than ever before. Hollywood and electronics companies are evolving away from the almighty silver disc (albeit a little slowly) towards 4K streaming and downloading of movies, along with incredibly improved television content from a whole host of new content providers. Value for the home theater enthusiasts has gotten stronger and stronger, especially in the past five to ten years.

A perfect example is the 85-inch Samsung edge-lit 4K TV that I bought for my last house. It retailed for $10,000 and I got a pretty sweet deal on it and I never complained. Roll the tape forward to this summer, and I was able to get a G-Series Sony 85-inch, full-array backlit set that includes HDR for about 70 percent less. Today's AV receivers are also off-the-charts loaded with technology, but perhaps the biggest innovation on that front has been that room correction has finally gotten good. Speakers are also easier to drive, better looking, and more and more affordable.

There is just so much good going on in the home theater marketplace, it's hard not to be excited for the right now. But the topic of this article is what the future holds for home theater. And as we head into 2020, we already have some enticing clues.

MicroLED
If you are in the billionaire class, you can maybe conceive of spending right now on MicroLED solutions from the likes of Samsung, Sony, and a few others. Basically, this is a fully modular wall of video that changes the whole way one would look at video. You can configure how big you want. You can hang a virtual Warhol on your "video wall" while having a 12-foot image from an NFL game in 4K playing in front of an ocean scene live from Maui. The possibilities are simply endless. True, the cost today is pure insanity, running upwards of $300,000 to $600,000 per installation. But much like a 100-inch flat-panel TV cost $120,000 ten years ago and $10,000 today, Micro LED will become more attainable in the years to come. With that said, all home theater enthusiasts need to be keeping an eye on MicroLED and its vast potential.

8K Video
Let's call a spade a spade here: 8K video's benefits are more about scaling lower resolution video right now, as many content providers can't keep up with the demand and bandwidth needed for 4K, let alone anything higher. Cable can barely do 4K if at all, and a lot of people, especially back east, are stuck with cable. That said, streaming at its best does a very good job at 4K right now, assuming you've got a halfway decent Internet connection, and as recently as early 2016 it could barely do a decent job with HD. Movie downloads can be a little better in terms of quality, but only from providers like the Kaleidescape store, which requires expensive hardware plus silver-disc-expensive movie costs.

Looking forward, it is unlikely that Ultra HD Blu-ray will be re-outfitted for 8K, as the lifespan of the silver disc is seemingly very short these days. What you need to make 8K enjoyable today is a TV with excellent video processing. Taking 1080p and/or 4K video content and scaling it up to 8K can lead to some really good results. Assuming, of course, you're sitting closely enough to a large-enough display to see the difference. And yes, there are some over-the-air broadcasts in 8K in Japan but I don't have an antenna that big and neither do you. That doesn't make 8K less exciting, but it needs to be viewed in its proper perspective. In the coming years with a bigger and better data pipeline, 8K video might make even more sense and offer and even more amazing visual experience.

Day-and-Date Movie Releases
Hollywood is afraid to make the move today, but it is coming, as the temptation to sell movies on their release date right into your home is so very tempting, especially as fewer and fewer people trek to the cinema for anything other than the latest Marvel or Star Wars movies. Home video isn't the business that it used to be, but it made the studios a lot of money for a long, long time. The movie theater owners are fighting the concept of day and date, yet the period of time from a theatrical release to a home video release is getting shorter and shorter--sometimes as short as 90 to 120 days.

The biggest problem with day-and-date to date is that the few company's who've actually managed to make it work think they can charge $1,500 to $3,000 per movie for a two- to three-day "rental," which is simply not going to appeal to too many people that fly on anything under a Gulfstream G550. (Screw us G200 peasants--we can't afford the movies like this). At $150 to $250 per movie, though, this new-school pay-per-view might have some legs. Kaleidescape clients would pay that type of money. Others using a Roku or an Apple TV might too, as watching a first-run movie at home might be worth a few hundred dollars. The movie theater owners will freak out, but what can they do? Day-and-date movies are an inevitable part of the future of home theater.

Our Access to Excellent Content Will Continue to Explode
Of course, one thing I left out in the above discussion about day-and-date is that it's simply becoming increasingly irrelevant as more and more filmmakers create their works for home consumption first and foremost. Technology companies like Apple, Amazon, and Google are big into the content business today. Amazon Studios is building a multi-billion-dollar studio right by the Sony Lot in Culver City. They are all-in. Netflix couldn't be more all-in with their big-ticket original programming.

Apple is just launching their service this fall, but their movie and TV content already looks world class from what I've seen. Google can't be ignored either. All of these tech players want to get in on the content business and that is good news for home theater enthusiast.

Traditional studios are scrambling to catch up in the content arms race, and understandably so. Disney bought Fox for more content and more brands, true, but more important was the fact that Fox was a leader in streaming, which now makes Disney a leader in streaming overnight. Everybody is in on the content game, which is helping Hollywood grow, but more importantly create better and better content.

Of course, this new distribution paradigm and all of the content it brings with it does have its downside: peak subscription saturation. Cable and satellite bills can be very, very high today. Add in a handful of streaming services and that investment in content gets even higher. This is already turning into some big turf wars from the new tech players, the studios, and traditional content providers as well as the cable/satellite companies. That could be ugly for a while, but how much you pay for ESPN in your bundle today is ugly right now.

Better Integration of Control and Smart Home
We've seen massive changes in the world of smart home in the past five years. The trickiest of tricks from the world's most expensive homes have trickled down to nearly anyone's home. With pretty affordable parts on the shelves of stores such as Home Depot, Lowes, Best Buy, or Amazon.com today, any of us can become budding home integrators. Connected door locks, smart lighting, cameras, cloud-based security, wireless audio, and so much more are a DIY reality today. Tomorrow, they will be even easier to use, more powerful, and likely less expensive.

Of course, we would be remiss if we didn't also point out that smartening up your home doesn't actually increase its value. At least not now. It's like having a swimming pool inside your house. People may dig it, but they're not willing to pay extra for someone else's pre-owned and pre-programmed smart home tech. My fully Crestron-automated smart home didn't sell for a premium, despite all of the automation and AV tricks that we installed (shades, lights, enterprise-class networking, distributed audio, distributed video even to the pool cabana, etc.).

Today's smart home products are without question cool, but they don't boost the value of your home like a new roof or a pro kitchen. With more and more higher-performance, easier-to-use DIY smart home products coming to market in the future, though, smart home could be a lot more mainstream and better integrated with the home theater experience in the coming five to 10 years, which may actually lead to its worth as a bullet point on your listing brochure.

Globalization Will Provide Better and Better Value
President Trump's trade wars are a terrible idea to anybody from either side of the aisle, as they are nothing more than a glorified tax that hurts international trade and local industry alike. But Donald Trump's role as leader of the free world is in serious jeopardy right now, with many CEOs and AV industry leaders champing at the bit for change. Our next leader(s) in the coming years will hopefully get global trade issue right, because the reason that 85-inch TV I mentioned earlier is 70 percent cheaper today than it was five years ago is because it's made outside of the United States (and Europe). I am confident that Asian manufacturing (especially in Vietnam and Taiwan in the future) will continue to improve both in terms of overall quality, as well as in volume production that allows us, the home theater consumer, to get better and better gear at more and more competitive prices. Don't be shocked to see African countries and Mexico play a bigger and bigger role in AV manufacturing in the coming years, too.

So, where do you think the home theater business is going in the next five years? What are the most exciting technologies to you? Is specialty home theater a growth business between now and, say, 2025 or 2030? What is the future of the brick and mortar store? The big box stores? Comment below, as we love to hear your thoughts.

You'll automatically be entered in the HTR Sweepstakes, and get the hottest audio deals directly in your inbox.
Subscribe
Connect with
Login
Connect with
10 Comments
Oldest
Newest Most Voted
Inline Feedbacks
View all comments
This is the static ad content. This is just a placeholder for now to get things styled.
Visit Website