Single-ended triode (SET) amplifiers have a cult-like following in audiophile circles, but their limited power output has limited their usability. Terry London discusses the appeal and challenges of SET amps and puts three high-quality options to the test. 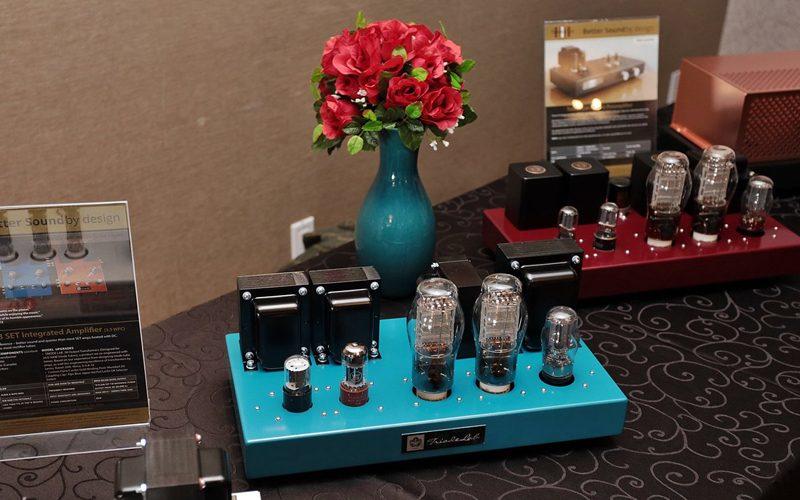 Immediately after my review of the Tekton Design Double Impact floorstanding speaker was published, I began to receive emails from readers who saw the potential of mating the Double Impacts with one of the most legendary amplifier designs: the SET, which stands for Single-Ended Triode. SET amplifiers and the tubes used in them (45s/2A3s/300bs) have attained cult-like status because they reproduce certain aspects of music in a special and unique way. However, they also earn the nickname "flea-watt amplifiers" because their total power output is anywhere from two to eight watts. To get the magic from an SET amp, you have to mate it with a very high-efficiency speaker, at least around 95 dB or higher--and the speaker can't have any nasty low-impedance curves in its design. Readers were requesting that I review several types of SET amplifiers (using different triode tubes) to see how well this breed of amplifier would team up with the Double Impact speaker, which has a 98.82-dB efficiency rating and gentle crossover slopes, and it never dips below four ohms. It seemed like a perfect pairing of an ancient technology with a brand new one.

Historically, only two types of speaker designs paired well with SET amplifiers. The first was the high-efficiency horn-loaded speaker, which could sound quite exciting because of its speed and macrodynamics. However, I find that horn-loaded speakers have two serious downfalls. No matter what type of amplifier you use, after a short period of time, these speakers can sound quite edgy and produce listening fatigue. Also, they produce a "horn coloration," like the music is coming out of a megaphone.

The other speaker design that's often teamed with an SET amp is the single-driver speaker that's close to 100-dB efficient, has no crossover, and has very easy impedance curves. These single-driver designs produce a beautiful midrange; however, they are sometimes rolled off in the high frequencies and really can't produce very low bass frequencies in modest listening environments.

When it comes to more traditional speaker designs, there really hasn't been a highly efficient, full-range (20 Hz to 30 kHz), multi-driver four-way design that would work properly with an SET amplifier in the history of high-end audio, which makes the use of SET amplifiers very limited and compromised. That is, until the Tekton Double Impact arrived on the scene.

But let's back up for a moment. Just what is an SET amplifier? It's a vacuum tube-based design that uses a single-triode tube per channel to produce output without splitting the musical signal's plus/minus parts in each channel. In contrast, a push/pull amplifier, which uses a pair (or more) of tubes, splits the plus/minus of the music signal, then it has to put them back together to form the complete musical wave in each channel. Many argue that, once you split the signal's plus/minus, you never quite put it back together again with the exact purity that it contained beforehand. This is technically referred to as a crossover distortion, which ironically doesn't have anything to do with actual speaker crossovers. Also, almost all reference-level SET amplifiers run in pure Class A, not AB, to further avoid this type of distortion. The perceived high sonic quality is mainly attributed to the simplicity and minimalist approach of the circuits involved, as well as the triode vacuum tubes that are typically used. One SET aficionado describes it as "a Zen simplicity to reproduce the complexity of music. Less is more." Of course, as with any other amplifier, an SET's overall build quality, the type/quality of internal parts, and the power supply will define how well it performs. For an SET design to fully live up to its potential, its transformers (core material, type of wiring, mastering of hand winding, isolation/shielding) must be of the highest quality; otherwise, the amplifier will roll off the top-end frequencies.

The most popular SET amplifiers use three types of triode tubes: the 45, which produces around two watts per channel; the 2A3, which produces around five watts; and the 300b, which produces around eight watts. In 1906, an American engineer, Lee De Forest, invented the prototype triode tube. A triode tube has three internal parts (filament/grid/plate). Even though the 45 and 2A3 were manufactured back in the 1930s and '40s, many NOS (new old stock) tubes are around because so many were produced for all types of devices, including radios. The 300b tube, meanwhile, was invented and manufactured by Western Electric for its movie theater amplifiers in the 1930s and '40s. The original tubes are now very rare and can cost thousands of dollars for a matched pair. Luckily, there are current 300b tubes being manufactured that are quite good and relatively inexpensive. One of the SET amplifiers I auditioned for this piece is built by Sophia Electric, which is famous for its different 300b tubes. In my tube collection, I have both the Royal Princess and Mesh Plate 300b tubes, which are wonderful in their musical performance. If triode tubes are set up correctly regarding plate voltage and biasing they can have a long life (up to 10,000 hours).

To choose which SET amps to pair with the Tekton speakers, I researched the various companies that design and build SET amplifiers and narrowed it down to three manufacturers that stood out from the rest. Two of these companies I already have experienced with: Canary Audio and Sophia Electric, both of which are American-based. The third manufacturer was a new one for me: Triode Lab, from Ontario, Canada. All three SET amplifiers that I auditioned are superlative in their build quality, design, quality of transformers, and types of caps/wiring. Each amplifier is self-biasing, so you just plug in the tubes carefully and are ready to start listening. It takes about 20 to 30 minutes for these SET amplifiers to fully warm up to sound their best.

As I mentioned, the Double Impact speaker has an efficiency of 98.82 dB and doesn't dip below four ohms. Here's some salient information about volume levels: a speaker that is 96-dB efficient will produce 102-dB volume levels on peaks with four watts; with eight watts, it will produce 105-dB levels on peaks. I have a very large listening space (24 feet high by 30 wide by 30 long) and experienced no attenuation/distortion at very high sound pressure levels with the three SET amplifiers I auditioned.

Let's begin with the Triode Lab SET 2A3S-MK2, which produces 4.5 watts per channel and retails for $3,800. It's a single-chassis stereo amplifier that uses 2A3 power tubes and is tube rectified (5R4 tube), and the driver tubes are a pair of 6SN7s. This amplifier ships with very good NOS tubes and has the classic "battleship" look, with the tubes spread across the top plate and the transformers located behind them. The demo piece that Triode Lab sent me had a very attractive metallic blue/green color. The 2A3 tube is, without a doubt, the most intimate and colorful of the three SET amplifiers in my survey, with the most liquidity and "meat on the bones" imaging. If you mainly listen to and love acoustic jazz, classical music quartets, and opera, you would want to listen to the 2A3-MK2 all day long. [Since this article was written, Triode Labs has stopped production of the 2A3S-MK2 because James Transformers has stopped building the HIFI transformers used in this unit. A new model, the $3,500 2A3S-MK3 (shown above), replaces the 2A3S-MK2 and has the same sonic qualities as the review piece.]

The Canary Audio SET 300b M-80 is a mono-block amp that retail for $9,000/pair and puts out eight watts per mono block. The price includes a pair of 6SN7 driver tubes and the (5U4G) rectifier tube; however, you must provide your own pair of 300b tubes. I used Sophia Electric's wonderful-sounding Mesh Plate in my auditioning process. My demo pair came in black and was quite handsome in its appearance. Of the three SET amplifiers I evaluated, the M-80 mono blocks had the greatest purity of tonality and timbres--that silky, grainless ease of an SET design--but added powerful macrodynamics, pressurizing my listening room in a way that you'd think could only be done by a 100-watt amplifier. This did not come at the expense of musicality or a natural presentation. When the recording venue had a very large space and was big on macrodynamics, the M-80s gave me the total experience in a powerful way. The M-80 mono blocks can do justice to any type of music. However, if you listen to a lot of rock, hip/hop, rap, dance music, electric, and big orchestra music, you would want to have this type of SET amplifier in your system.

Finally there's the Sophia Electric 91-01 300b mono-block amp, which retails for $5,000/pair, includes its own manufactured and designed tubes, and puts out eight watts per channel. My demo pair was clad in a black matte color with very impressive gold-colored Sophia Electric badges on the front. Sophia Electric has just come out with a new 300b tube called the Classic, as well as a special rectifier tube called the Aqua 274B that was built to drive the Classic 300b tubes to their maximum potential. With these tubes in place, the 91-01 mono blocks delivered a great midrange filled with lifelike colors and timbres of the different instruments, 3D imaging with air around each individual player, a sweet extended treble, and very accurate bass extension. My experience of this pair of 300b-based mono blocks was that it was somewhat musically in the middle between the warmth and intimacy of the Triode Lab 2A3 amplifier and the ball-busting power of the Canary Audio M-80 300b mono blocks.

All three of these SET amplifiers produced gorgeously dense tonality and timbres with all instruments and voices, as well as stunning realism and immediacy with vocals. Additionally, all the amplifiers had sweet and airy treble, with decays that were crystal clear, and they rendered all images with 3D density and solidarity. Lastly, each amp gave the impression that anything between you and the music was stripped away, creating a sense of purity that allowed the music to effortlessly float into the room. Which one is right for the proud owner of a new pair of highly efficient speakers? It's hard to pick because each option has so much to love. Perhaps price drives the decision. Perhaps access to the components and/or the tubes, as many of these electronics are limited in production? Either way, I don't see a way to lose.

The SET amplifier is certainly not the best choice for every audiophile, in that some will want that "there's no replacement for displacement" style of high-output amp. But it's exciting to see how today's super-efficient speakers potentially could introduce a whole new audience to the enticing sounds of the Single Ended Triode. They are truly magical to listen to.

You'll automatically be entered in the HTR Sweepstakes, and get the hottest audio deals directly in your inbox.
Author
Terry London
When you buy through links on our site, we may earn an affiliate commission. Your support is greatly appreciated!