WhatsOn: You'll Get a Kick Out of the Charming Ted Lasso on Apple TV+

WhatsOn: You'll Get a Kick Out of the Charming Ted Lasso on Apple TV+

In a slow week for streaming, Olivia highlights some titles you might have missed, like Ted Lasso on Apple TV+ 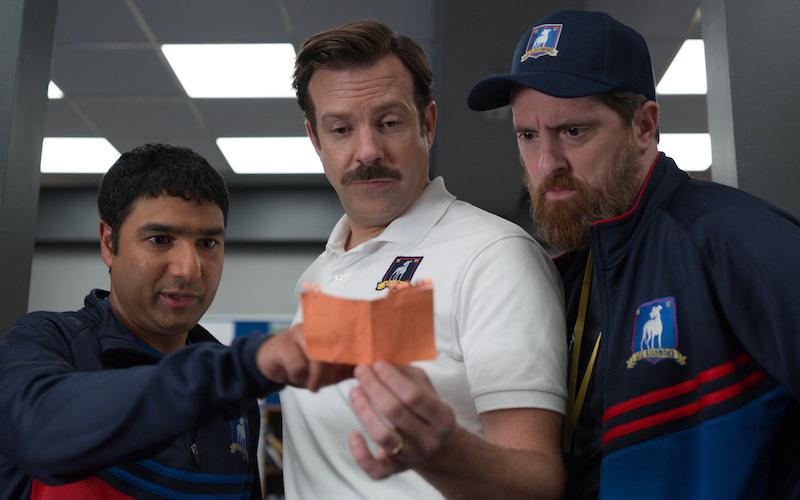 It's safe to say that many had low – or no – expectations for an Apple TV+ series based entirely on a few NBC Sports promotions about an American football coach who goes to England to coach the other kind of football. Yet Jason Sudeikis' ability to take the comically goofy, almost-too-stereotypically southern coach and turn him into an endearing character helps make this show a winner.

That's saying a lot for a show that was based on the seemingly flimsy premise of its lead character being comically unaware of how little he fits into this world of football that's literally and figuratively foreign to him. Sudeikis' character debuted nearly six years ago in commercials that promoted NBC Sports acquiring the rights to broadcast Premier League games, and fans definitely got a kick out of them. But when Ted Lasso (the series) was announced, you could almost hear the audible groans.

How very American to draw something out until its dying breath, and then beat it with a stick a few more times to make sure it's well and truly dead (can you say Fast & Furious?). Yet Ted Lasso succeeds despite its thin premise, and despite expectations it would become little more than background noise for laundry folding.

Ted Lasso – the character and the show – is charmingly innocent and a heartwarming fan-favorite because they're underdogs. Viewers are offered a multitude of sci-fi, thrillers, and dramas, but Apple TV+'s new gem promises that there are no monsters beneath the bed, no heart-wrenchingly devastating scenes, just simply a man who wants to do well for his team but might suffer a few hurdles along the path to winning over a team owner and a fanatical fanbase.

The Ted Lasso of this series differs a bit from the original character. He's now a folksy Midwesterner who led his small-college Kansas football team to a championship in his first season as head coach and is shockingly hired by Rebecca Welton to coach the fictional AFC Richmond Premier League team she's just acquired in a nasty divorce. Ted and assistant coach Coach Beard – Brendan Hunt, reprising his role from the commercials – fly to England with little to no knowledge of soccer and are immediately met with disdain and hatred from Richmond's fans and the journalists covering the team.

If that were the entire plot, it would make for pretty dull and clichéd television, no? But there are two additional plotlines that help make the series so appealing: The first is that Welton, as we learn in the pilot, hired Ted in hopes that he would cause the team to crash and burn because it was her ex-husband's prized possession. She'd like nothing more than to punish her ex by seeing the team fail miserably.

The second is Ted's personal life. We learn that he's having marital problems, and one of the motivations for him taking the AFC Richmond job is to give his wife some space. Watching the eternally optimistic and cheerful Ted go about his business despite this backstory gives him depth and makes him a pretty admirable character. And Sudeikis portrays him by demonstrating acting chops even the comedian's biggest fans may never have realized existed.

Ted Lasso's ninth episode premieres today, with the season finale coming October 2. That gives viewers who may have overlooked it plenty of time to binge on earlier episodes.

Netflix:
A Perfect Crime [HD, Dolby Digital+ 5.1] – This new Netflix Original series focuses on the unsolved 1991 assassination of German politician Detlev Rohwedder. The series takes archival news and investigative footage and intercuts it with interviews with experts and those who have researched the case to try and uncover who actually killed Rohwedder. If you liked previous Netflix crime series like The Devil Next Door or Making A Murderer, you'll definitely want to watch this one. The entire four-part series is now available to stream.

A World of Calm [HD, Dolby Digital+ 5.1] – A television show based on an app sounds about as appealing as one based on a commercial, but hear me out. This new HBO Max Original is a collaboration between the makers of Calm – a sleep and meditation app – and Nutopia, the production company that produced National Geographic's One Strange Rock.

A World of Calm is almost like a meditative show for adults: Each half-hour episode is narrated by a different celebrity – Kate Winslet, Mahershala Ali, Idris Elba, Oscar Isaac, Nicole Kidman, Zoë Kravitz, Lucy Liu, Cillian Murphy, and Keanu Reeves are all slated – and focuses on a different narrative. One episode takes viewers through the forests of Latvia, while another brings viewers inside a chef's kitchen in Seattle. It may sound a bit out there, but when it can be stressful just to turn on the news, wouldn't it be nice to take a break and just listen to Elba or Kidman tell you about our solar system? The new show premieres October 1 for a ten-episode run.


A Wilderness of Error (FX) [HD, Stereo 2.0] – This new, five-part documentary series takes a look at the case of Dr. Jeffrey MacDonald, an army surgeon who was charged with the killing of his wife and two young daughters. The gruesome murders sparked a trial in which MacDonald proclaimed his innocence by claiming his family was murdered by a group of "hippies" copying the Manson family. The series examines the murder, MacDonald's possible motives, as well as why he might actually be innocent. Based on Errol Morris's novel of the same title, the first three episodes of the five-part series premiere on Hulu September 26.


Knives Out [UHD HDR10, Dolby Digital+ 5.1] -- Although it has been out for almost a year and on Amazon Prime for a while, it's still good to remember that when all else fails, this whodunnit comedy with a stellar cast is a safe bet. The film focuses on the death of family patriarch Harlan Thrombey (Christopher Plummer), a famous crime novelist who dies at his 85th birthday party. Detective Benoit Blanc is called in to investigate and weed out the family member who killed Thrombey. Filled with twists and turns, and centered around the most dysfunctional family you can imagine, the film is fast-paced and entertaining from beginning to end. If you somehow missed it, here's your chance to rectify that mistake. If you've already seen it but don't own it on UHD Blu-ray, why not enjoy the outstanding performances by Jamie Lee Curtis, Toni Collette, Michael Shannon, Don Johnson one more time?