Olivia highlights some solid contenders for your weekend binge-watching 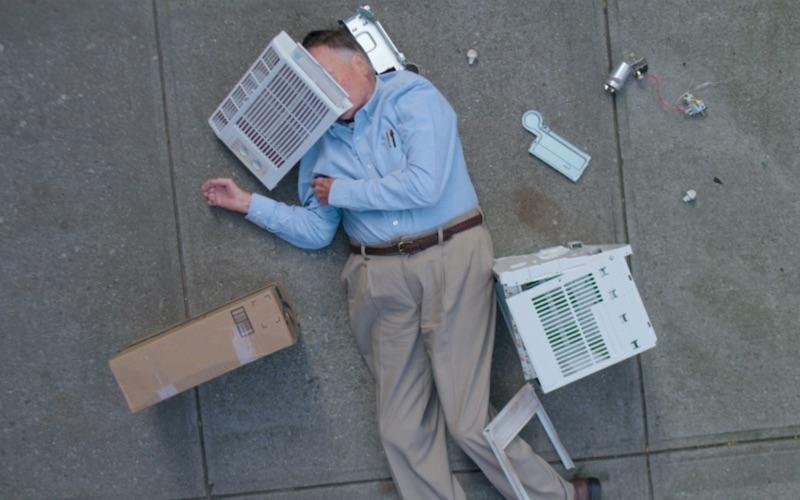 Thinking about death is, for many, uncomfortable at the very least. Many artists have tried to tackle the end of life only to find that death is one of those things that is entirely subjective, both personally and culturally. So, although the title of Kristen Johnson's second documentary may be unsettling, for some it could be one of the most touching and uplifting films you see this year.

Dick Johnson Is Dead originally premiered at the 2020 Sundance Film Festival, where it snagged the Special Jury Award for Innovation in Non-fiction Storytelling. The premise is simple: Johnson films her father, who had recently been diagnosed with dementia, dying in a series of gruesome and violent ways. She even stages a fake funeral for him and outlines a scenario in which he enters heaven. Why make light of something so serious and tragic? It gives Johnson an opportunity to examine how we grieve and how we can make death easier for us and the person we are preparing to mourn.

Dick Johnson Is Dead can be considered a preview obituary, a memorial, and a declaration of love. It is a cathartic piece of art that shouldn't work, but does. Richard "Dick" Johnson is a retired psychiatrist who moved in with his daughter after losing his wife to Alzheimer's. That is where the movie begins. Rather than spend the entire film looking back on his life, Kristen Johnson focuses entirely on the future, but it's future filled with theatrical and almost entirely unbelievable demises, rather than the likely and less dramatic ending. The film attempts to answer the question, "What do you do when you know almost certainly how a loved one is going to die?" by swinging hard left and depicting a "death by air conditioner" and a fatal tumble down a staircase, for example.

Dick Johnson Is Dead may not be for you, but it is nevertheless incredibly engaging. It's not so much the visual scenarios of an 84-year-old man dying over and over again in different ways or the playful hilarity of seeing the impossibly sweet and chipper Dick pop up after each death. The most compelling reason to watch this nearly 90-minute movie is to explore one's own grieving mechanisms and consider how to ethically mourn someone before their demise. Dick Johnson Is Dead, although playful and bright, does not sugarcoat anything: Dick is certainly going to die, and his demise will likely be relatively soon. But that doesn't mean that his loved ones have to sit idly by, waiting for the day when he passes on.

Dick Johnson Is Dead is now available to stream on Netflix.

Netflix:
The Playbook [Ultra HD, Dolby Digital+ 5.1] – It may seem like there are one too many "feel good" sports documentaries and films out there, but give Netflix's latest a try. Each episode profiles a different coach, from the NBA's Doc Rivers to tennis coach Patrick Mouratoglou, as they expound upon the tenets that have gotten them to where they are and the wisdom they try to impart to their charges. An interesting look behind the curtain of professional athletics, each half-hour episode shares little-known facts about coaches and players and offers insight into coaching styles and professional team-building. All five episodes are available now to stream.

The Great British Baking Show Season 8 [HD, Stereo 2.0] – If there's anything 2020 needs, it's more intensely competitive yet extremely cheery baking shows. If you haven't been keeping up with The Great British Baking Show, now is your chance to start with the second episode of Season Eight, premiering today. Hosted by British comics Noel Fielding and Matt Lucas – neither of whom has any experience in food aside from eating it – and judged by the arrogant Paul Hollywood and the sharp-witted Prue Leith, the show consists of the whittling down of competitors who partake in challenges to display their baking prowess. Oftentimes overdramatic, always insanely entertaining, the show combines the judges' humor – if you haven't seen Noel Fielding's work on The Mighty Boosh, you're missing out – with the fast-paced hysteria of bread that won't rise and pastry dough that won't bake. A new episode premieres every Friday for ten episodes in all.

HBO Max:
American Dynasties: The Kennedys [HD, Dolby Digital+ 5.1] – Although America may have long surpassed its need for a family like the Kennedys, their inner turmoil and drama – not to mention the "Kennedy curse" – has long been a thick thread in the tapestry of American folklore. CNN's 2018 series explores how the Kennedys came to be and how their dynamic has influenced American history from the Cold War to the way Wall Street has evolved. Narrated by Martin Sheen – a reason on its own to watch – the six-part series explores the past foibles of the Kennedys, as well as a  look at those carrying on the family name. The series even takes a look at the forgotten Rosemary Kennedy, the eldest of the Kennedy siblings,whose horrific abuse at the hands of her family was hidden from the public eye. If you thought you knew all there was to know about America's beloved "First Family," think again. The entire series is available now to stream.

Best In Show [HD, Dolby Digital+ 5.1] – We are so lucky. We are so lucky that Christopher Guest's masterpiece mockumentary chronicling the world of competitive dog shows is finally available to stream. Starring comedic royalty such as Eugene Levy, Catherine O'Hara, and Jennifer Coolidge, the 2000 film holds up today in terms of sheer cleverness and nonsense. Each marriage and partnership chronicled in the film is at once entirely over-the-top and instantly recognizable as someone you may know in your own life. If you haven't already seen it, be sure to give it a watch this weekend.


Monsterland (Hulu Original) [Ultra HD, Dolby Digital+ 5.1] – Hulu re-enters the thriller genre with its latest original, based on Nathan Ballingrud's North American Lake Monsters: Stories. Each episode of the eight-part series focuses on a different story and its "monster," which range from mermaids to angels, and oftentimes takes an allegorical stance. Hulu's response to HBO's Lovecraft Country is partly chilling and partly thought-provoking. Enjoyably spooky, the entire series is now available to stream.

Disney+:
Mr. Holland's Opus [HD, Dolby Digital+ 5.1] – This 1996 film starring Richard Dreyfuss is still heartwarmingly enjoyable. It focuses on a frustrated composer who is struggling to remain happy in his high school teaching position while remaining present for his family. Twenty-four years after it debuted, the film remains a tearjerker that chronicles Mr. Holland's life. Available now to stream.

Amazon Prime Video:
Black Box [UHD HDR10, Dolby Digital+ 5.1]  – Amazon is entering October with highly-anticipated original thrillers such as this one, which focuses on a single father whose wife has died in a car accident, whichleads him to agree to an experimental therapy that attempts to uncover the patient's suppressed trauma and memories. However, as one might suspect, the therapy turns out to be more than the practitioner bargained for, and supernatural horrors begin to surface. A new film produced in partnership with Blumhouse, directed by Emmanuel Osei-Kuffour, Jr, Black Box premieres on October 6.

The Lie [UHD HDR10, Dolby Digital+ 5.1]  – Amazon's other October 6 Blumhouse premier follows the aftermath of a teenage girl's impulsive "murder" of her best friend, and the aftermath of her parents going to obsessive lengths to cover up the crime. Starring Peter Sarsgaard, Mireille Enos, and Joey King, the film is directed by Veen Sud.

Apple TV+:
Tiny World [Dolby Vision, Dolby Atmos] – Fittingly narrated by Paul Rudd – the MCU's Ant-Man – this new docuseries follows the smallest of earth's inhabitants and documents their survival techniques. A six-part series that took a decade to film, Tiny World features stunning cinematography and stunning insights into the world of the tiny creatures it examines. The series premieres today.