In another week with few notable releases, Olivia highlights Netflix's follow-up to The Haunting of Hill House and an overlooked Apple TV+ thriller 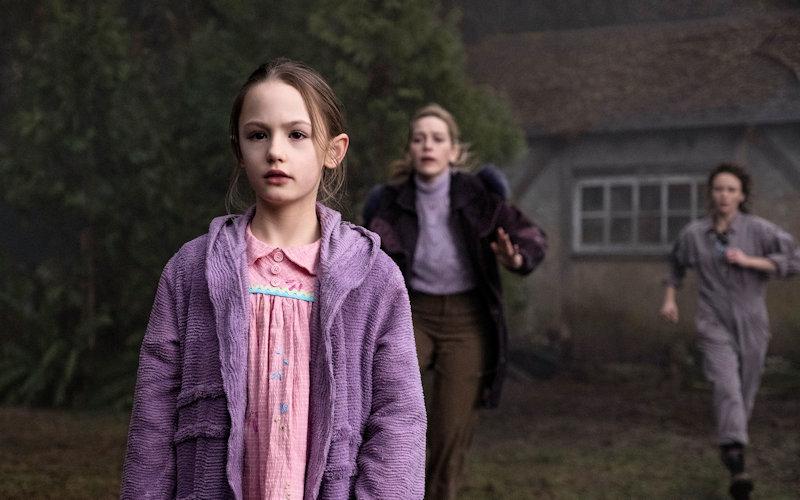 Netflix has a penchant for wringing the most out of its acclaimed originals until there's nothing left but a weak plotline absent viewers' favorite characters. This couldn't be further from the truth with the follow-up of The Haunting of Hill House.

Mike Flanagan's emblematic exploration of family trauma and addiction premiered almost two years ago to rave reviews and the expectation that Netflix would follow up with a sequel. That brings us to The Haunting of Bly Manor, based on author Henry James' The Turn of the Screw. This show finds almost all of the original cast members of The Haunting of Hill House in entirely different roles and in a new plot, but Flanagan is back as director, as well as much of the original eeriness that made its predecessor so wildly popular.

Despite the cast, cinematography, and supernatural themes all being very similar The Haunting of Bly Manor is not necessarily meant to mimic Flanagan's first Netflix flick. Instead, it focuses its allegorical lens less on the grief that stems from unresolved familial issues and on marriages that can sour. Bly Manor is a much more literal interpretation of its source material. The Haunting of Hill House took Shirley Jackson's novel and delved into the question it raised about the degree to which strange phenomena are supernatural or simply mental anguish. The Haunting of Bly Manor turns James' novel into a love story. The scares are less blood-curdling and more intriguing, and most of its mysteries are resolved in nine 50-minute episodes.

As a horror show, it offers nothing close to Hill House's Bent-Neck Lady and Tall Man. But it's an engaging and sometimes spooky story about emotional attachments, highlighted by Victoria Pedretti's ability to express terror simply with her facial expressions and an occasional wail. Although it may not be the outright horror that fans of the first show were hoping for, The Haunting of Bly Manor stands on its own as this week's view-worthy streaming recommendation. All nine episodes are available now on Netflix.

Netflix:
Deaf U [Ultra HD, Dolby Digital+ 5.1] – Netflix has no shortage of reality programming, yet most of it is white noise at best and, at worst, entirely unwatchable. Thankfully, that's not the case with this show, which focuses on six Gallaudet University students. Gallaudet is the only higher education institution that exclusively serves hearing-impaired students. Deaf U profiles six of them at different stages of their education but facing similar life decisions. The show is engaging without being pandering or fawning. It empowers the students to present their own narratives, rather than being spoken for. In many ways, this is an enlightening show, from the first of its eight episodes to the last. All are available to stream now.

HBO Max:
Wild Card: The Downfall of a Radio Loudmouth [HD, Dolby Digital+ 5.1] – This HBO documentary charts the rise and subsequent ruin of Craig Carton, a once-popular WFAN sports-radio shock jock whose gambling addiction contributed to his arrest in 2017. Carton, who was released from federal prison this past June, is interviewed throughout. So are those close to him, including former co-host Boomer Esiason and former New Jersey Governor Chris Christie. With more insight into Carton's life circumstances and the chain of events that led to his arrest, this hour-long documentary should be interesting to fans as well as those who previously knew nothing about Carton.


Books of Blood (Hulu Original) [Ultra HD, Dolby Digital+ 5.1] – Hulu continues its foray into the horror genre, this week with the premiere of a horror anthology film based on Clive Barker's collection of short stories of the same name. More of a slow burn than a fast-paced thriller, this one is an interesting take on Barker's stories. Its themes include seldom-covered topics such as the disorder misophonia, in which certain sounds trigger unreasonable emotional or physiological responses.

Amazon Prime Video:
Evil Eye [Ultra HD, Dolby Digital+ 5.1]  – Amazon's partnership with Blumhouse continues with the first of its two October 13 releases. This one focuses on reincarnation. After Pallavi introduces her new boyfriend to her intensely superstitious mother, mom gets the idea that he's the reincarnation of her own ex-boyfriend who once tried to murder her. Let's just say it doesn't make for a great family dynamic.

Nocturne [Ultra HD, Dolby Digital+ 5.1]  – Euphoria and Sharper Objects fan-favorite Sydney Sweeney co-stars in this new thriller focused on a shy but gifted pianist who makes a bargain with an unseen malevolent force to become more successful than her outgoing twin. Reminiscent of Black Swan, this new Amazon original premieres on October 13.

Apple TV+:
Servant [Dolby Vision, Dolby Atmos] Though it premiered almost a year ago, M. Night Shamylan's contribution to Apple's still bare-boned streaming service was criminally overlooked – and now is the perfect time to watch if you haven't already. Dorothy and Sean Turner are a grieving couple whose infant son, Jericho, has died. As a result, Dorothy has become unhinged from reality. As a coping mechanism, Dorothy takes to a doll as if it were her deceased son and hires a nanny to care for the "child," much to Sean's chagrin. However, the mysterious new nanny, Leanne, has a sinister air that causes Sean and those around him to begin questioning who she really is. In a series fraught with chilling themes and characters who are all unlikeable in their own way, Servant delivers a gripping ten-episode run.