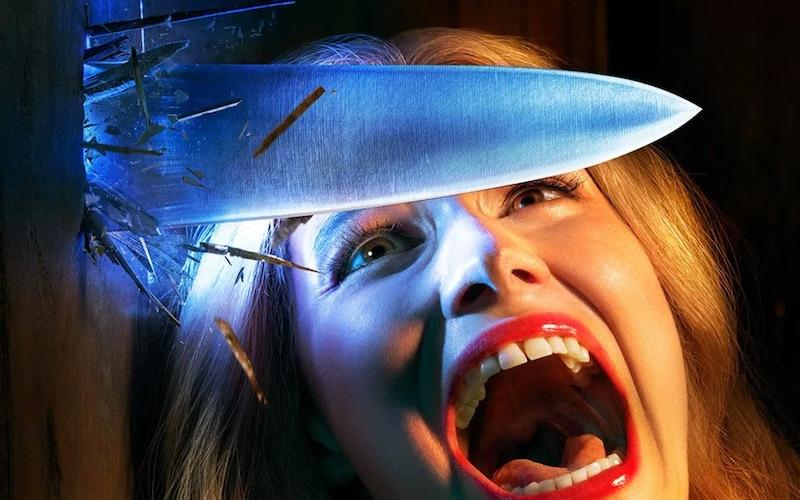 Ryan Murphy and Brad Falchuk’s long-running franchise has built its foundation on trying to be the weirdest, most artfully disturbing and disgusting show on an elite network while maintaining thought-provoking storylines. Some past seasons have achieved this – Murder House and Hotel – while others fall disappointingly short.

1984, the franchise’s ninth season, takes the campy nostalgia and decade parody that was infused throughout Coven, Asylum, and Freak Show, and combines it with the slasher mystery that is present in every single season for a nine-episode run that is wholly expected, but also proves the writers have a few more tricks up their sleeves after a disappointing previous few seasons.

With a leading cast that took a gamble with no recurring fan-favorites – Jessica Lange, Evan Peters, and Sarah Paulson are noticeably absent – and a plotline that seems geared towards a younger audience, AHS: 1984 surprisingly pulled through with pleasing results. The ninth season tackles slasher film tropes head-on, specifically those that dominated the 1980s and '90s. Five friends decide to escape L.A. and work as counselors at a sleepaway camp and soon find themselves in the murderous midst of a slasher rampage eerily similar to that of real-life serial killer Richard Ramirez – who, played by Zach Villa, makes an appearance in the show.

With episode titles like “Slashdance,” “Red Dawn,” and “Final Girl,” this season relies on its audience to have a knowledge of pop culture history extending to the '80s, but understands that most of these references and nods to iconic tropes are part of the zeitgeist. In this way, Falchuk and Murphy’s latest creation is one of the most inclusive AHS seasons to be released in a hot minute. It is camp, encapsulated: viewers don’t have to frantically search for Easter eggs hidden in moral lessons, or think about where we go when we die – although the concept of purgatory is explored, but in a fun, fake-blood way. Yes of course, there is societal commentary by way of the leading villain, but not so much that it’s shoved down your throat via musical numbers or meta-commentary.

Falchuk and Murphy prove that, with a franchise as successful and twisted as American Horror Story, sometimes, less is more. Yes, the usual push towards a rejection of the patriarchy and how religious fervor can sometimes do more harm than good is present, but that is to be expected with every release from these creators. Surprises abound, but not ones that you have to think too hard about, and the panic in the show is not so much exaggerated as theatrical. You do not have to get attached to the characters to enjoy them, and there are so many real-life connections to point to, from the Satanic Panic to serial killers that actually terrorized neighborhoods at the time.

AHS: 1984 is now streaming on Netflix and Amazon Prime. Viewers should note that both streaming services have the same audio and visual formats, so it really comes down to which you personally prefer. It should also be noted that one of the films the show references is Friday the 13th. Coincidence? Probably, but still pretty cool.

Netflix:
The Crown: Season 4 [Dolby Vision, Dolby Digital+ 5.1] – Longstanding fans of Netflix’s award-winning original series have been waiting with bated breath for Princess Diana’s appearance, and season four finally gives it to them – along with a bit of Margaret Thatcher for good measure. Emma Corrin has been cast perfectly as the beloved Lady Di, who enters the scene in the '80s and quickly proves to be more than Queen Elizabeth II (Olivia Colman) bargained for. Following a more morose season, season four is all about the glamour and intrigue of the '80s and the queen’s conflict with Thatcher – played by Gillian Anderson, who was most definitely born for this role. The show’s knack for perfectly casting its characters coincides nicely with the plotline that fans have been waiting for: veteran viewers and newcomers alike will not be disappointed. Stream the entire season on November 15.

The Life Ahead [Dolby Vision, Dolby Digital+ 5.1] Sophia Loren makes her grand return to the screen in this Netflix original directed by her son, Edoardo Ponti. Loren stars as Madame Rosa, a Holocaust survivor who now runs a daycare and is saddled with the care of an orphaned Senegalese boy, Momo, with whom she develops a bond. The heartwarming if clichéd story is a triumphant return for Loren, one of the last few great stars of Hollywood’s golden age. The film is now available to stream.

The Life Ahead | Official Trailer | Netflix

HBO Max:
His Dark Materials: Season 2 [HD, Dolby Digital+ 5.1] – Based on Philip Pullman’s darkly enchanting series that tackles themes of adolescent trauma and mental health, the HBO drama returns for a second season. Whether or not you’ve read the books, the show is a truly remarkable adaptation of a vast universe of multi-dimensional characters. The entire first season is available to stream on HBO Max, and the second season premieres on HBO and HBO Max November 16.

Between the World and Me [HD, Dolby Digital+ 5.1] – This compelling adaptation of Ta-Nehisi Coates’s book combines footage of the Apollo Theater’s 2018 stage performance with documentary footage of the actors and archival footage as well as animation. Powerful and timely, HBO’s new release is an essential piece of art. The new film, directed by Kamilah Forbes, premieres on HBO and HBO Max on November 21.

Hulu:
No Man’s Land [HD, Dolby Digital+ 5.1] – This unexpected Hulu Original follows Antoine, a young French man who is searching for his sister in the midst of the Syrian civil war and who ends up joining an all-female Kurdish militia. A dose of thrilling drama from a service that doesn’t always have the best luck with its original releases, No Man’s Land premieres on November 18.

Apple TV+:
Fireball [Dolby Vision, Dolby Atmos]  – Werner Herzog’s third 2020 release pairs the famed German director with Clive Oppenheimer, a Cambridge University volcanologist, as they try to understand the history and geology of meteorites. Interviewing a range of personalities from a jazz musician to a Jesuit priest, the co-directors explore “space rocks,” and why they are so fascinating and have been a human fascination since the beginning of time. Herzog and Oppenheimer’s film feels less like a straightforward documentary and more of an artful exploration that answers questions in a more dynamic way than other science-based films. The documentary is available now to stream.

Amazon Prime Video:
Small Axe [HD, Dolby Digital+ 5.1] – Starting November 20 and every consecutive Friday until December 18, Amazon Prime is releasing a new film from Steve McQueen, each of which focuses on Black life in London, specifically the West Indian community and the racial injustice and prejudice they have faced. Each film focuses on a different time period, from the 1960s to the 1980s, with familiar names starring, such as John Boyega and Letitia Wright. Mangrove premieres on November 20, followed by Lovers Rock on November 27, Red, White and Blue on December 4, Alex Wheatle on December 11, and the series culmination, Education, on December 18.