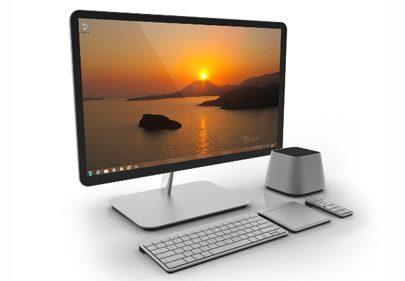 Vizio recently launched a line of PCs. However, it should be noted that this is not new territory for the company, but rather a return to products from their past. This time around the PCs seem like a good choice for home theater enthusiasts.

While Vizio's announcement regarding their entry into the PC and tablet markets isn't new, the discussion has been reinvigorated as of late because the once-prototype products are nearly ready to begin shipping, to which I say, bring them on. While some people, mostly those in the AV space, have scratched their heads at Vizio's move into the highly competitive and often cutthroat world of PCs, I believe it makes perfect sense. After all, Vizio started as a computer display company. It's true: Vizio's origins go all the way back to a monitor company by the name of Princeton Graphics, which in its heyday was among the more respected computer monitors one could buy. Princeton Graphics would give way to V. Inc, and later Vizio as we know it today.

As the nation's leading seller of LCD HDTVs, there isn't much Vizio has left (from a sales standpoint) in terms of proving it can swing with the big boys like Samsung, Panasonic, LG and Sony. Knowing this, it makes sense that Vizio would look elsewhere to new and emerging markets they've yet to explore - or dominate. I see tablet PCs and phones as a logical step over, say, ultrabooks, laptops and desktop PCs, but Vizio is choosing to tackle it all at once. However, what I find interesting is that instead of breaking into the marketplace and undercutting budget HP, Asus or even Samsung PCs, Vizio seems hell-bent on going after Apple. While that strategy may sound risky, I must say that, after much debate, albeit with myself, I think it's the best way to go, especially following the somewhat limp news of the soon to be updated MacBook Pro and MacAir lines of products. Minus Retina Display, both updated product lines aren't that much different or revolutionary in terms of their performance over the previous models. Sure, there's improved NVIDIA graphics (on some models), as well as the newest Intel mobile processors, but PC platforms have been enjoying both upgrades for some time now, so in essence, Apple has merely caught up. Does this mean the new Apple laptops suck? No, not even a little bit, but the once-mighty king no longer reigns supreme, which is why I believe Vizio, more than other PC makers, is better suited to take advantage of this.

Having proved its dominance in the consumer HD space, Vizio knows what its customers want: style, substance, affordability and ease of use. One look at Vizio's PC lineup shows that the same mantra that has driven the company's HDTV sales (not to mention distribution channels) is present and accounted for in its new PC products. What's more impressive is that, despite its somewhat higher than mainstream PC prices, Vizio's performance/equipment specs stand toe-to-toe with Apple's new product launches - again, looking past Retina Display. To top it off, I think the new Vizio PC designs are gorgeous. Sure, there's an aura of Apple-ness to them, but as Jeremy Clarkson once said when describing the Jaguar XK, "That's like criticizing someone for looking too much like Brad Pitt." I don't think Vizio is going to get a free ride into the PC world but I don't believe its strategy and subsequent move into the market is necessarily going to fail, either. The new Vizio line seems to blend style and substance brilliantly and when you factor in how well (supposedly) its PC products integrate with its existing HDTV line, you start to see how one may be swayed into making a household an all-Vizio house.