USA Today's Mike Snider recently penned an article titled "Cutting the Cord: Smart TVs can be the ticket to 4K" discussing how cord-cutters--those who are canceling their cable/satellite subscriptions in favor of streaming services--may drive the adoption of 4K Ultra... 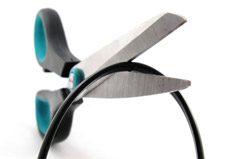 USA Today's Mike Snider recently penned an article titled "Cutting the Cord: Smart TVs can be the ticket to 4K" discussing how cord-cutters--those who are canceling their cable/satellite subscriptions in favor of streaming services--may drive the adoption of 4K Ultra HD TVs. This makes sense, given that Netflix, Amazon, M-GO, and other streaming services are embracing 4K a lot faster than their broadcast, cable, and satellite counterparts...with the exception of DirecTV, which is now offering 4K VOD to subscribers who own compatible equipment. As long as the cord cutter has the bandwidth to stream Ultra HD, why not shop this holiday season for a TV that can play back the higher-resolution content?

From USA Today
Cord cutters may lead the way to 4K.

Broadband homes that use Net-delivered video services such as Netflix and Amazon rather than traditional pay-TV services could help drive consumer acceptance of the higher-definition content format, several trends suggest.

That's because Netflix and other streaming services are leading the way in delivering 4K video. Also known as Ultra High Definition, it has four times the resolution of current HD.

And "smart" Ultra HD 4K TVs from LG, Panasonic, Samsung, Sharp, Sony and Vizio are the first to let you stream 4K content directly from Netflix, which has movies such as Crouching Tiger and Hidden Dragon, TV series such as Breaking Bad and The Blacklist, and some stunning nature documentaries.

Samsung sets can also stream pay-per-view movies like Sin City: A Dame to Kill For on the DreamWorks Animation and Technicolor-owned Net video service M-Go and deliver them from DirecTV. Other TV makers and video services plan to expand their 4K efforts, too; Samsung and Sony also have hard drives that store 4K movies.

This combination of smart TV and 4K could explode this holiday season because lower prices are bringing smaller 4K sets down to $1,000 or less – and larger 4K displays have big discounts, too.

These holiday deals could help the number of Ultra HD 4K sets purchased in the U.S. surpass the 1 million mark by year's end. Growth in the installed base could, in turn, lead to more content and more consumers, and so on.