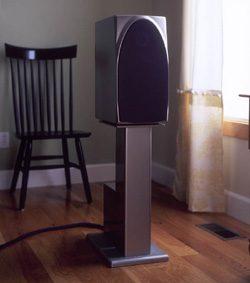 Audio Reviews, Bookshelf Speaker Reviews, Equipment Reviews
Published On: January 17, 2010
We May Earn From Some Purchases Via Affiliate Links

While Wilson does not make inexpensive speakers, this is the lowest price model they have produced thus far. This attractive model has a "to-die-for finish, astounding build quality and...true high-end performance." Sound wise, the Duettes "will sing with a full-blooded, massive soundstage, enough to humiliate systems twice their size..." 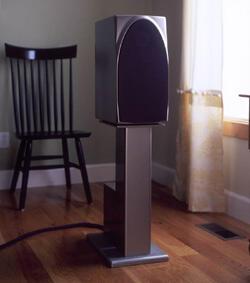 Wilson Audio's Duette is the company's biggest departure yet, outside of the WATCH wall-mounts, from their primarily floor-standing format. While hardly cheap - Dave Wilson has stated emphatically, many times, that he cannot make budget speakers because of the materials he insists on using - the Duette is the company's new entry-level speaker. As for size, well, who can kvetch about a serious two-way speaker in an enclosure that measures 18-and-two-fifths inches x nine-and-one-tenth inches x 13-and-seven-tenths inches (HWD)? This is a seriously small speaker by whacko high-end audiophile standards, which brings us to the next crucial element of the design, the trait that may offer its greatest appeal to non-audiophiles and house-proud wives.

Wilson felt that merely down-sizing and "down-costing" weren't enough to make this a speaker for a broader clientele. It had to be more room-friendly than any of the existing models. So, with deft tweaking of the crossover, with due attention to the wiring, the rear port, the voicing, Wilson has produced a model that actually excels in many ways when used against boundaries. In this respect, the Duette is almost insouciant regarding positioning.

Another thing: this is the first Wilson speaker ever that wasn't beaten to death with the ugly stick. It's actually pretty, rather then merely another exercise in form following function. The sculpted front panel that minimizes diffraction, the "cathedral" grille, the breathtaking automotive-grade gloss finishes - you'd be forgiven for thinking Wilson hired an Italian designer to handle the aesthetics.

Back to the painless positioning, though. With the Duette, you can stand it on a rack straight out of a budget furnishings catalogue - zero rigidity, anathema to audiophiles - and with no attention paid to toe-in, relative height or any other concerns. And still the Duettes will sing with a full-blooded, massive soundstage, enough impact to humiliate systems twice their size. That's the Duette party trick: you simply do not expect near-Sophia sound from a speaker with a footprint not much larger than an LP sleeve that stands only 18 inches tall.

To achieve this, the Duette demands a decent amp, despite specs that suggest it will run with something small, like a multi-channel receiver. Why is this so? Simple: the Duette is so open and detailed and uncolored that it is cruelly revealing of an amplifier's weaknesses beyond mere power limitation. The Duette is a monitor in the truest sense.

High Points
• This speaker is pure Wilson all the way. You get the to-die-for finish, astounding build quality and, above all, true high-end performance. Then again, they are priced to compete in the high-end market.
• The Duette is smaller than you'd think, not far off from the classic Advent of yore, so it is as room-friendly and practical as the design brief demands.
• Wilson, though more concerned with shelf-mounting, provides the necessary crossover options so you can use the Duette as a purist floor-standing design. If you are a stereo-imaging fanatic, or an obsessive when it comes to transparency, the Duette will sound better away from the walls and on the optional stand.

Low Points
• If you buy the Duette with the stand, the price is perilously close to that of the superior Wilson Sophia. This is not damning the speaker due to price; it merely points out a pricing anomaly in the Wilson catalogue. For an analogy, think Porsche Boxster convertible vs. Cayman coupe. Who pays more for the closed version?
• Bass enthusiasts will want to add a subwoofer, especially in a home theater system.
• The Wilson Duette requires as good an amplifier as you'd pair with the Wilson Sophia or WATT/Puppy. Do not insult the Duette with a cheap A/V receiver, despite the fact that it will play loudly with one. You didn't go cheap on the speaker, so don't go cheap on the amp, either.

Conclusion
Here's where I court some dissent, possibly antagonizing Dave Wilson, because I emphatically prefer the Duettes on their optional stands, away from the walls. For two-channel listening in "audio casualty" mode, you'll find it worth sacrificing some boundary-enhanced bass for greater three-dimensionality and air. This is classic, text-book stuff about near-boundary effects; no mysteries here. I just find the slight loss of fatter lower registers to be inconsequential, especially when compared to the freedom the sound gains by eliminating any sort of congestion. But whether personal taste or domestic issues dictate either of the two positions in your listening room, you'll be listening to a proper Wilson regardless. It's just not huge, ornery nor bank-breakingly expensive like, say, the Wilson MAXX2 speakers.

If the Duette is as important as I suspect it to be, then the implications go beyond the coffers of Wilson Audio. This is unquestionably a milestone in high-end, small-box loudspeaker design. The fact that it installs painlessly in every way will win it legions of fans: it's neither power-hungry nor room-fussy, it delivers the sort of performance you'd expect of a much larger speaker and it is unlikely ever to be obsolete, given Wilson's evolutionary practices. Unless you are some brain-dead Dr. Dre fan requiring more bass or higher maximum SPLs, I can't think of a better way for you to fill a modest to even larger room with spellbinding sound.