Wireworld announced this week from High End Munich 2019 the release of its second-generation Ethernet patch cables, which differ from the normal Cat 5e/6 cables you may be currently using in your system by virtue of the fact that they... 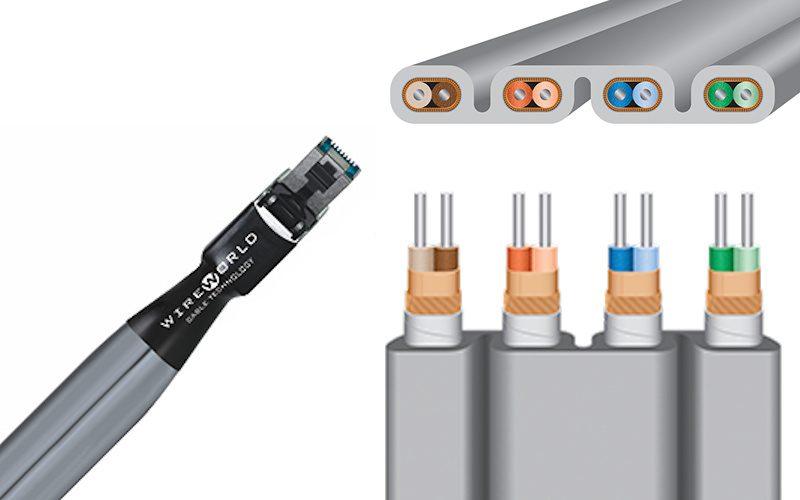 Wireworld announced this week from High End Munich 2019 the release of its second-generation Ethernet patch cables, which differ from the normal Cat 5e/6 cables you may be currently using in your system by virtue of the fact that they don't rely on twisted pairs. The new flat cables are offered in three varieties--with your choice of oxygen-free copper, silver-clad OFC, and 99.99999-percent pure silver--with prices ranging from $15 per meter to $600 per meter, plus termination.

Read on for the full press release from Wireworld:

"People don't realize how much musical detail is being lost by their Ethernet connections until they compare their network sound to an internal drive or USB stick," states Wireworld designer David Salz. "These cables isolate network noise to minimize that loss and provide sound quality that approaches the clarity of a local solid-state drive."

The official network cable categories (ie. Cat5/6/7/8) only include twisted pair cables, so these non-twisted twinax cables cannot be rated by those test specifications. However, it is interesting to note that the 100Gb/s (QSFP+) Ethernet cables used in internet server installations are also twinax designs. The patented "Tite-Shield" design utilized in these cables places the conductors in parallel, with each of the four pairs isolated from the others by dense triple-layer shields. This radical flat design is so effective at isolating noise that replacing only the final cable in the network can substantially improve sound quality.

The Series 8 upgrades of these cables involved two critical areas of performance. The density of the triple-layer shields was increased, which reduced both cross-talk and external interference. However, the controlled listening tests also revealed that internally generated 'Triboelectric noise' was still masking too much quiet musical information. Upgrading from Wireworld's proprietary "Composilex 2" composite insulation, used in the original versions, to the newly developed and much quieter "Composilex 3," enabled even finer musical details to be preserved.

The three cables differ only in their conductor materials. The Chroma 8 is yellow with Oxygen-free copper conductors. Starlight 8 is red with silver-clad OFC conductors and Platinum Starlight 8 is silver with conductors made of the most conductive metal available, Ohno Continuous Cast solid silver of 7N (99.99999%) purity. With next generation performance and versatility, Wireworld Series 8 Ethernet cables provide audio/video consumers and professionals with objectively superior network fidelity.