Wireworld Cable Technology is releasing their latest line of USB Audio cables, the Platinum Starlight® 7 USB and Silver Starlight® 7 USB. Wireworld cables are very fast at 10.2Gbps, are well-insulated and have a good reputation in the industry after... 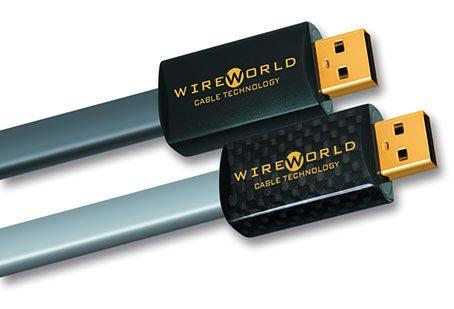 Wireworld Cable Technology is releasing their latest line of USB Audio cables, the Platinum Starlight® 7 USB and Silver Starlight® 7 USB. Wireworld cables are very fast at 10.2Gbps, are well-insulated and have a good reputation in the industry after years of well-recieved products.

From Wireworld
Wireworld Cable Technology, one of the world's most respected manufacturers of high performance audio and video cables, is releasing their Series 7 reference USB Audio cables, Platinum Starlight® 7 USB and Silver Starlight® 7 USB. The addition of Composilex® 2 insulation makes them dramatically quieter and their upgraded DNA Helix® design increases their transmission speed to a class-leading 10.2Gbps+. These advantages minimize jitter, which maximizes the musical realism of high resolution PCM and DSD music files.

"Critics and customers seem to agree that the Series 7 upgrades are our best ever," comments Wireworld President and founder David Salz. "The pristine tonality and expressive musicality of Platinum and Silver Starlight 7 USB cables is a wonder to behold. Our previous series was widely considered the best available, and Series 7 outperforms it in every way."

Both cables employ Wireworld's patented DNA Helix design with six signal conductors – twice as many as other USB cables – arranged in a newly expanded symmetrical geometry that channels more electromagnetic energy to exceed 10.2Gbps transmission speed, dramatically faster than other cables and the official USB high speed specification. The Composilex 2 insulation reduces triboelectric noise in the signal conductors and it also triples the noise-absorption of the isolated power conductor to produce surprisingly lifelike tone color and imaging.

Featuring molded carbon fiber connectors and six solid silver conductors (3 x 23AWG) for uncompromised performance, Platinum Starlight 7 USB has a suggested price of $700 for one meter. Silver Starlight 7 USB features the same DNA Helix design with six silver-clad OFC conductors and aluminum connectors at $300 for a one meter cable. Both cables are available in lengths from .3 to 5 meters in A to B and A to mini B configurations.

Wireworld Cable Technology, which was founded by industrial designer David Salz in 1992, is the premier provider of leading edge digital and analog cable technology for home audio and video, from HDMI and USB audio to state of the art high-end interconnects and speaker cables. Wireworld earned its world-class reputation by producing superior cables based on the use of objective perceptual testing, innovative patented designs, premium materials, and exceptional manufacturing quality. For more information, visit: http://www.wireworldcable.com/ or call 954-464-4474.