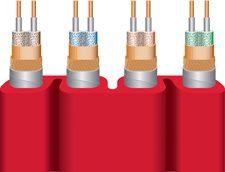 At this week's CES, Wireworld will show off a new Ethernet cable, the Starlight Category 8, designed to meet the proposed standards for Category 8 and provide reliable high-speed performance for streaming video and music applications. The Starlight Category 8 cable has a flat design that provides greater separation between the four conductor pairs to provide lower crosstalk, and its Tite-Shield technology more effectively isolates the four channels with a three-layer shield on each conductor pair. Pricing and availability have not yet been announced.

From Wireworld
Wireworld Cable Technology announces the development of its Starlight Category 8 cables for high speed media network applications. Unlike Category 7 cables, these innovative cables utilize a new conductor geometry developed by Wireworld to support higher transmission speed for the most lifelike reproduction of streamed music and video.

Category 7 cabling was created to satisfy the demands of 10 Gigabit Ethernet. Even though most media networks now run below that speed, cables that support higher speeds have been found to improve the quality of audio and video streaming. Those improvements are possible because streamed signals suffer from data errors that cannot be repaired by the error correction systems that preserve file transfers. The proposed standard for future networks is Category 8, which extends network speeds to the staggering rate of 40 gigabits per second.

One of the reasons why CAT 7 cables do not meet the proposed CAT 8 specifications is that they allow too much crosstalk (mixing) between the four signal channels. To control crosstalk, conventional cables use four twisted pairs of conductors with one foil shield on each pair. An overall two-layer shield reduces outside interference. The problem with twisting is that it makes lengths of the conductors uneven, which causes timing errors called skew. Tite-Shield technology isolates the four channels with a three-layer shield on each conductor pair. Those shields are so effective that twisting is no longer needed and conductor length differences are eliminated.