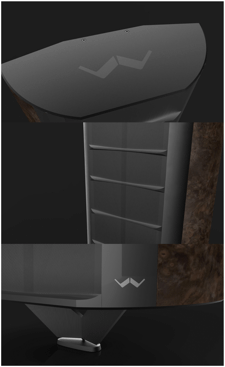 Related Articles and Content
You can read more about similar topics by reading our other articles, Wisdom Audio Set to Launch "Suitcase" Subwoofer and the Wisdom Audio Sage Series Speakers review by Dr. Ken Taraszka. You can also learn more by visiting our Floorstanding Speaker News and Review sections or our Wisdom brand page. Internal wiring features cabling sourced from Transparent Audio, the industry's most respected audiophile cable manufacturer. The depth of each on-wall enclosure is 12 inches.

Unlike conventional speaker drivers which are magnetized after assembly, the planar magnetic drivers used in the new Wisdom Series LS4 and LS3 models incorporate magnet assemblies that are pre-energized prior the driver's final assembly. According to Wisdom, the LS4 incorporates no fewer than 1,656 magnets, equal to 392 linear feet. The lower range driver uses ceramic magnets, whilst the upper range driver incorporates neodymium magnets.

The Wisdom Series LS4 and LS3 are designed to optimally mate with Wisdom Audio's STS Regenerative Transmission Line® subwoofer, which features the same combination of ultra-high efficiency and dynamic range.