Wolf Cinema has introduced two new projectors with the REF-700 and REF-1000 that will make up the company's reference line of projectors. The features promise some unique and interesting features. 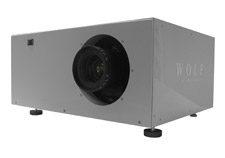 Wolf Cinema just announced the first shipments in the company's all-new Reference Series of 2D/3D theater projectors.The REF-700 and REF-1000 projectors are new additions to the Wolf Cinema line, delivering 3D images on screens up to 18 feet in width.

The Wolf Cinema REF-700 and REF-1000 projectors boast the company's precision VariScopeTM memory lens system, whereby a wide variety of TV and film content can be viewed without the need for an external anamorphic lens. This technique accesses a wide range of popular aspect ratios, from 16/9 all the way up to CinemaScope 2.35/2.40:1, and stores them in memory for quick access via the projector's IR remote or RS-232 control scheme.

The Reference series of projectors can be ordered as either 2D-only projectors, or configured as full 3D HD imaging systems, with the 3D editions boasting the very latest in "Triple Flash" imaging technologies for ultra-smooth, ghost-free performance. A near-field 3D emitter and four pairs of custom 3D glasses are included with each REF 3D edition. Additional 3D glasses and ceiling mount kits are also available as key system options.

Wolf Cinema projectors are available only through a select network of highly-qualified audio/video specialists around the world. The new Wolf Cinema REF-700 and REF-1000 are shipping now, inclusive of standard selection primary optics, at starting MSRP retail prices of $75,000.