LG has just annouced that it will be showing off a stunning curved Ultra HD television at CES 2014. It is the first Ultra HD curved television LG has produced, and the largest anyone has ever produced. The television boasts... 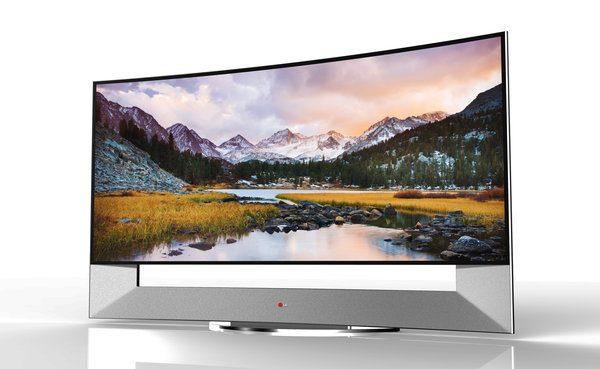 LG has just annouced that it will be showing off a stunning curved Ultra HD television at CES 2014. It is the first Ultra HD curved television LG has produced, and the largest anyone has ever produced. The television boasts a pixel count of 5120 x 2160, well above the 4K and Ultra HD standards. In the same way that widescreen TVs sought to create the movie theater experience at home, it would seem LG is joing in with other curved television makers such as Samsung in an attempt to emulate the premium curved screen experience that Cinemark XD and other theaters now offer.

This awe-inspiring TV offers magnificent picture quality and a wide viewing angle with the ability to render the minutest detail in breathtaking clarity to create an unprecedented level of viewer immersion. The 105UB9’s cinematically proportioned 21:9 CinemaScope screen is ideal for enjoying movies as they were meant to be enjoyed. Another advantage of the extra-wide screen is that it enables users to access viewing information on the side of the screen without blocking any of the ongoing action.

Boasting an 11 million pixel (5120 x 2160) screen resolution, the 105UB9 represents the successful collaboration between LG Electronics and LG Display. In order to realize the TV’s curvature, new technology was introduced to maintain structural integrity and deliver uniform color and brightness across such a large screen. Until now, OLED panels were preferred for curved displays due to their ability to generate their own light. LG Display overcame the challenge of uneven backlighting by refining its Thin Film Transistor (TFT) pixel circuit technology to prevent color leakage and to ensure a superior viewing experience from virtually any angle.

“LG Display has kept its dominant position in the display market with innovative and differentiated technologies,” said Yong-kee Hwang, Senior Vice President and head of LG Display’s TV Business Unit. “With a resolution of 11 million pixels, the 105-inch curved LCD panel is proof of our continued leadership in the next generation display market, offering exceptional world-class value to our customers.”

Visitors to LG’s booth at CES 2014 (Las Vegas Convention Center, Central Hall #8204) from Tuesday, January 7 through Friday, January 10 will have the opportunity to see this unique product for themselves.

“We’re proud to reveal our 105-inch CURVED ULTRA HD TV at the world’s largest technology event,” said In-kyu Lee, Vice President and head of the Home Entertainment Company’s TV division at LG Electronics. “Claiming the world’s first and the world’s largest titles, LG’s 105UB9 employs cutting-edge technology to provide a truly unique viewing experience. We will continue to drive the next generation TV market and demonstrate that with LG, it’s all possible.”