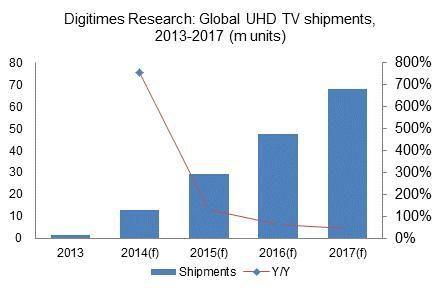 Worldwide Ultra HD TV shipments will see a compound annual growth rate (CAGR) of 160% from 2013 to 2017, soaring from 1.5 million units to 68.2 million, according to Digitimes Research.

Digitimes Research's freshly published Special Report, "The transition to 4K TV - UHD TV market forecast, 2014-2017," estimates that 26.6% of all TVs shipped in 2017 will be UHD models, and in the 55-inch segment, more than 90% of the LCD TVs to be shipped in 2017 will deliver UHD or higher resolutions.

As with other new types of video services, UHD adoption will rely on compatible content and TVs to drive the market, according to Digitimes Research. While the current video industry environment in not ideal for UHD TV, Digitimes Research argues that the expected support of Blu-ray Disc (BD) for UHD content and increased user-created content will help demand take off in 2015. However, it will be active engagement from TV manufacturers that will be the primary driving force of UHD TV growth.

Traditionally, new TV technologies, such as 3D and OLED, have been driven from the top end of the market, in terms of both vendor support and pricing. UHD technology, on the other hand, is being driven by panel makers in mainstream markets by a multitude of vendors, with the China market taking the lead. Based on this, leading global vendors such as Samsung and Sony may be forced to engage in UHD TV price competition earlier than they would like, meaning there is a chance for UHD TV to quickly become widespread in the overall TV market. Digitimes Research forecasts that in 2015 the penetration rate of UHD TVs in the overall TV market will exceed 10% for the first time, with shipments reaching 30 million units.

The Digitimes Research Special Report also looks at opportunities in the UHD TV market from various perspectives, including developing trends in supply chain dynamics and technology trends in the TV SoC and LCD panel industries. In addition, the report provides analysis of the competitive strategies for UHD TV deployment for vendors from South Korea, Japan, China, as well as regional TV vendors.