Back in January, I reviewed Wyred 4 Sound's excellent mAMP. To form a complete system, power amplifiers like the mAMP need to be tethered to a preamp. Enter the companion model, Wyred 4 Sound's mPRE stereo preamp, which not only... 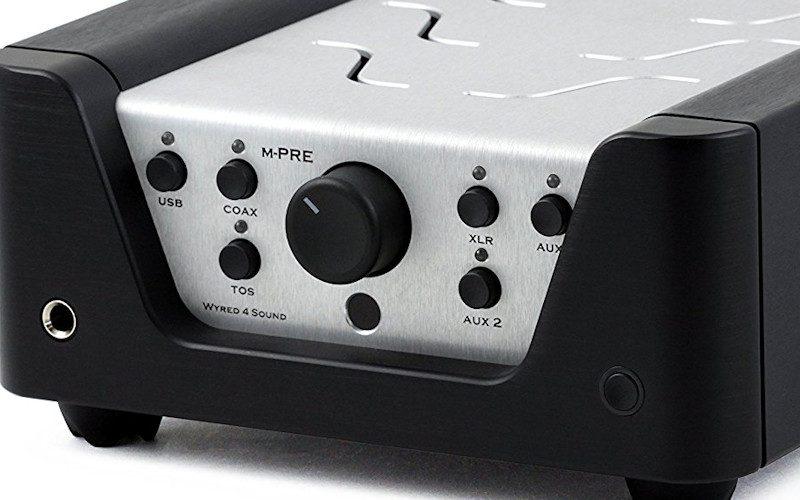 Back in January, I reviewed Wyred 4 Sound's excellent mAMP. To form a complete system, power amplifiers like the mAMP need to be tethered to a preamp. Enter the companion model, Wyred 4 Sound's mPRE stereo preamp, which not only shares a similar price ($1,099) as the monoblock mAMP ($999) but is even housed in a similarly sized and shaped metal chassis.

Given the high level of performance of the mAMPs, I had high hopes for the mPRE. Except for some problems at the beginning of the review (which were solved by Wyred 4 Sound's fast-reacting R&D department), the mPRE by and large lived up to the promise of the mAMPs. For audiophiles who want top-tier sound and solid build quality at real-world prices, the mPRE and mAMP deliver a made-in-the-U.S. solution that's easy to live with.

A preamp has three primary functions: to adjust the volume level via a volume control, to select the source via a source-selection switch, and to send the signal to your power amplifier. The mPRE offers more than a bare-bones preamp function by including a digital-to-analog converter (DAC). The mPRE accepts up to a 192/24 sample/bit rate on all of its digital inputs: S/PDIF, Toslink (if supported by your computer), and USB. Along with its three digital inputs, the mPRE provides three analog inputs: one balanced XLR and two single-ended RCA. One stereo RCA input can be converted to a stereo pass- through via a rear-mounted push-button selector switch.

The mPRE has three pairs of analog outputs: one balanced XLR, one independently buffered single-ended RCA output that runs in parallel with the XLR outputs (its volume level changes along with the balanced XLR), and the last pair of analog outputs can be used as either a variable or fixed-level output selected via a second, small push-button on the back of the mPRE.

Inside the mPRE, you'll find a fully balanced analog circuit from input to output (for the balanced XLR input; single-ended inputs are changed to a balanced signal by the mPRE). The analog volume control is very similar in layout and design to the one created for Wyred 4 Sound's flagship analog preamp, the STP-SE, featuring completely separate right- and left-channel topology even at the power supplies. With over 80 FETs in a parallel scheme, the mPRE's dual-mono, dual-differential design was created to rival the best preamps regardless of price or design layout.

The mPRE's digital section is based around the 9023 ESS Sabre DAC. This DAC chip is combined with an XMOS asynchronous class 2.0 USB interface to deliver driverless connection for the MAC, but requires a supplied dedicated driver for Windows PCs. The 0.75-inch-thick aluminum front panel of the mPRE is simple and businesslike, with a centrally positioned master volume switch flanked by three input buttons on each side. Underneath the volume control is the window for the remote sensor, and on the lower left corner of the front panel is the mPRE's 0.25-inch stereo headphone output. The back panel contains all six inputs, three outputs, a 12-volt trigger input and output, the AC receptacle, and the main power switch.

During day-to-day use, I found the mPRE's simple mini-wand remote control to be very handy. Although it includes only an on/off button, up/down input buttons, up/down volume buttons, and a mute button, the remote supplied all the functions I needed. Although some stepper-motor volume controls I've used in the past have been either too slow to respond or hypersensitive, the mPRE's volume was just the right balance of a fast response time without excessive or overly rapid volume boosts.

I mentioned the two push buttons on the back earlier in the review. Although I appreciate the flexibility that the two switches provide - permitting a home theater bypass and variable/fixed level for the third analog output - the buttons themselves are somewhat problematic. They are simply too easy to push while attaching and removing cables from the back of the fully populated rear panel. I would prefer a sideways-moving switch rather than a push button because it would be harder to accidentally push.

I heard three different mPREs during the course of the review. The reason for the multiplicity of review samples wasn't due to any operational failures, but because of a potential problem with the mPRE's headphone output. The first unit I received had noticeable noise when mated with higher-sensitivity, low-impedance in-ear monitors. Wyred 4 Sound sent me a second sample to determine if it was an individual or universal issue. After I found the second unit had the identical noise level with certain headphones, Wyred 4 Sound went back and re-adjusted the headphone output circuit to reduce the noise level when using high-sensitivity headphones. A couple of weeks later, the third and final review sample arrived. The latest version still has a slight amount of low-level noise (principally low-level 120Hz hum coupled with a slight buzz) with my custom Westone ES-5 in-ears, but it is dead-silent with every other headphone I tried.

Click over to Page 2 for the Performance, High points and Low points and Competition and Comparisons, and the Conclusion . . .

Performance
Since the mPRE is, in essence, two products in one chassis - a DAC and an analog preamp – it makes sense that the sonic attributes and level of performance of the two parts might not be the same. In the mPRE's case, the analog preamp is quite a few levels better than the digital section. While I found the analog section's sonics were good enough to challenge many high-performance, purist analog preamps, the digital section, while adequate and certainly convenient, was nothing special.
During the course of the review, I used some very high-performance front ends with the mPRE analog section, including the Mytek Stereo 192 DSD, the Zodiac Platinum DSD DAC, and the M2Tech Young DSD DAC. In each case, the mPRE allowed the essential character of the DAC to come through with little editorialization. As is to be expected in the real world, the mPRE is almost but not quite ruler-flat in terms of harmonic balance, with a very slight amount of additional warmth in the lower midrange and upper bass that gives music a bit of a rosy glow.

I used the mPRE with several power amplifiers, including Wyred 4 Sound's mAMPs, April Music Eximus S-1 amplifiers, Krell S-150 mono blocks, and a Parasound A-23. In every case, the mPRE's analog section was dead-quiet, even when turned up to maximum level. The mPRE's smooth and grainless character interfaced synergistically with all the power amplifiers I connected to it. For most of the review, I used either the ATC SCM7 version III or the Audience 1+1 speakers, both of which are highly revealing near-field monitors.

Regardless of which amp/speaker combination I used, the mPRE's lack of electronic grain and overall transparency were obvious. On my recent recordings of the virtuosic Brazilian band Choro Dos Tres, the mPRE did an exemplary job of retaining all the inner details of my double DSD recording.

Detail-oriented readers will be thinking, "DSD? How did he play a DSD recording when the mPRE's digital section doesn't support DSD?" The answer is simple: I connected a DAC that does support DSD to the mPRE. For readers on a budget who are very interested in the mPRE but need to play DSD (as I do), I suggest attaching a Resonessence Labs Herus portable DAC ($350) to the mPre. Not only does the Herus better the mPRE's own built-in digital section on PCM material, but it also provides both 64x and 128x (double DSD) capabilities. Another added perk of owning the Herus? It's the size of a lipstick tube and makes a great portable digital audio solution.
I did a lot of listening to the mPRE's headphone output, mostly with the new Oppo PM-1 headphones. Since the PM-1s are a low-impedance, high-sensitivity design that was created to be driven by small headphone amplifiers, the mPRE had no problem driving them well past ear-bleed levels. I also paired the mPRE's headphone amplifier with a variety of other headphones, including the Mr. Speakers Alpha Dogs, Audeze LCD-2 bamboos, Ultimate Ears IERMs, Audio-Technica ATH-W3000 ANV, and Beyer- Dynamic DT-990 600-ohm version. Even with the low-sensitivity DT-990s, the mPRE had enough dead-quiet gain so that even my own recordings, which are recorded at lower average levels than most commercial releases, had adequate volume levels.

Moving on to the mPRE's digital section, if I had to come up with one word to describe it, that word would be "grayish." The sound isn't noticeably flawed, merely less exciting, dynamic, and involving as that from higher-performance digital sections. Even the modestly priced Resonessence Labs Herus had more dynamic life, harmonic complexity, and rhythmic drive than the mPRE's digital USB input.

High Points:
• The mPRE has a plethora of inputs and outputs.
• The mPRE's compact footprint makes it easy to fit into tight spaces.
• The mPRE's transparent sonics rival that of far pricier preamps.

Low Points:
• The mPRE's built-in DAC does not support DSD formats.
• The push buttons on the back of the mPRE are too easy to push accidentally while changing cables.

Competition & Comparison
Although there are many DAC/preamps available around the $1,000 price point, few have the quite the same feature set. The mPRE's three analog outputs and three analog inputs puts it in a better position to be the control center of an analog/digital system than many DAC/preamp combos, including even the Wyred 4 Sound DAC-2 DSD SE ($2,549) that lacks any analog inputs. Also, unlike some DAC/preamps that offer analog inputs, the mPRE does not transform analog into digital (and back to analog) before reaching your ears.

In terms of features and analog performance, I had to move up to the April Music Eximus DP-1 ($2,599) before getting to a similar level of sonic performance in the analog section and equally flexible ergonomics. The Eximus does have a better digital section than the mPRE, however.

If you only really need analog preamp control, you could look at the NuForce MCP-18 ($995). Although it's a multichannel analog preamp, it works nicely as a two-channel preamp and delivers a superb level of transparency and detail.

If you need a DAC/Pre primarily for headphone use, the new Oppo HA-1 ($1,199) could be a good alternative to the mPRE. With one fewer analog output and only one analog input, the HA-1 is not quite as flexible as the mPRE, but it supports DSD natively, as well as AptX digital Bluetooth sources.

Conclusion
The Wyred 4 Sound mPRE is a very fine, value-priced analog preamp that also has a built-in DAC. As an analog preamp, the mPRE's performance is far better than its price tag would indicate and rivals far more intricate-looking and expensive preamps. As a DAC, the mPRE is good, but not great. If I were putting together my first high-performance sound reproduction system, I wouldn't hesitate to include the Wyred 4 Sound mPRE as the heart of the system. Even as you move up the digital-source upgrade path with a higher-performance standalone DAC, the analog section of the mPRE will let you hear all the subtle improvements that a newer DAC can produce.