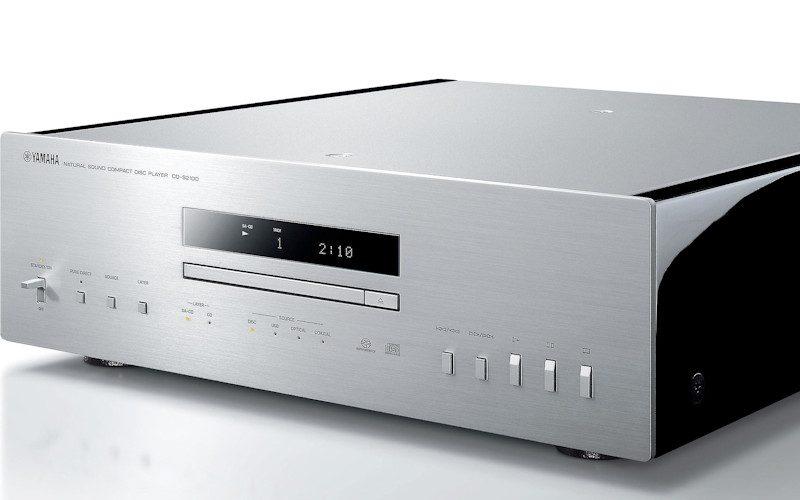 Audio and AV Equipment Reviews, Audio Player Reviews
Published On: June 17, 2015
We May Earn From Purchases Via Links 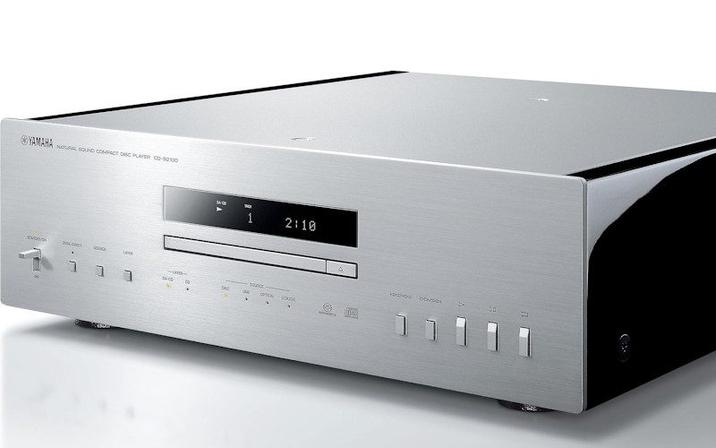 When Yamaha introduced the A-S2100 integrated amplifier as the newest member of its HiFi stereo component lineup late last year, the company also rolled out the amp's intended companion, the CD-S2100 CD/SACD player ($3,500). So it was only natural that, when Yamaha sent me the integrated amp for review (read my review of the A-S2100 integrated here), it also sent along the CD-S2100 CD/SACD player. This new CD player, like the integrated amp, finds itself just one step down from Yamaha's flagship CD player, incorporating much of the flagship's technology but at half its price.

Visually, the new Yamaha CD player is a high-end heavyweight contender (34.4 pounds) that screams quality, even at first glance. With its piano-black wood sides, thick brushed-aluminum faceplate, half-mirror display, and super-smooth-loading, rigid aluminum CD tray, you're immediately aware that this renowned manufacturer of musical instruments is obsessive about the details.

And that obsession isn't limited to just those things you can see. According to Yamaha, the over-arching aim of the S2100 series is "to deliver sound reproduction filled with a sense of energy and crisp openness." Under the cover, everything about the internal design seems to have been created in support of that objective. The words separation, balance, and symmetry immediately come to mind. I really appreciate clean, minimal design (think Apple), and the internal layout of the Yamaha player is one that I suspect even Jony Ive would have been proud to call his own. The digital and analog power supplies are completely separate, with the digital power supply and circuit board located on the left side of the chassis and the analog power supply and circuit board located on the right. Between these two circuit boards is a center frame that extends from front to back providing enhanced rigidity to the chassis while also housing the high-precision CD drive mechanism. This exemplary CD drive mechanism is the very same one found in Yamaha's flagship CD-S3000 CD player.

The remote control for the CD-S2100 player is very similar to the remote provided with the integrated amp. It has the same high-end, brushed-aluminum face and polished aluminum buttons. The remote is likewise shaped to provide a naturally great fit in the hand and is designed to control both the CD player and the integrated amp.

Except for a brief listening period connected to my reference Classé gear, I paired the CD-S2100 CD player with its companion A-S2100 integrated amplifier after having the integrated amp in my system for several weeks. For comparison purposes during this review, I switched between having the Yamaha CD player and my Oppo BDP-105 player connected to the Yamaha integrated amplifier. The two players are able to play both CDs and SACDs, and both contain DACs and have a variety of digital inputs for connecting other devices. To that end, I alternated connection of a Mac Mini that I use as a dedicated music server to the DACs of the Yamaha and Oppo players. After downloading and installing the Yamaha Steinberg USB driver V1.9.0 for Mac, I was quickly able to get the Mac Mini to recognize the Yamaha CD/SACD player and output audio to it. (There is also a Steinberg USB driver available for use with Windows-based PCs.) I then was able to stream digital music files from both my Synology Network Attached Storage (NAS) device using JRiver and from the online music streaming service Tidal HiFi through the Yamaha's DAC. I used the same WireWorld reference balanced interconnects and USB cable with both players.

While the Oppo player is one third the price of the Yamaha, both players have DACs from ESS Technology. The Oppo actually has the ES9018 Sabre32 Reference DAC, while the Yamaha sports the ES9016 Sabre32 Ultra DAC, one step down from the Reference DAC. It might be tempting to jump to the conclusion that the Oppo must sound superior based on that fact alone; however, while the choice of DAC chip is admittedly very important, there are numerous other factors at play that can also influence the resulting sound reproduced. I've learned that the old saying "Everything Matters" is so true in audio that I've made it a practice to always reserve judgment until listening.

On critical listening sessions comparing several familiar tracks from different genres that I use for evaluation, I found the Yamaha player to consistently be a bit more resolving than the Oppo player, fleshing out more micro details from the music without ever showing a hint of harshness. This improved resolution wasn't simply a result of boosting the upper midrange and treble either, as it was accompanied by a full, rich bottom end. The Yamaha presented the music with a touch more sparkle than the Oppo, making the sound seem a bit more alive. This quality made the Yamaha more enjoyable to listen to at lower volumes, as well. I could also pick out performers more precisely within the soundstage presented by the Yamaha, which was a bit wider than that presented by the Oppo.

I found myself listening to the Yamaha CD player for hours on end, always eager to hear the next track. Now don't get me wrong here: I still think the Oppo is a great player for the money. (I wouldn't own one if I didn't think so.) And yes, it can do more than the Yamaha, as it also plays multi-channel music and Blu-ray discs. But for two-channel music, the Yamaha takes reproduced sound to the next level, being maybe five to ten percent more resolving while presenting music with a bit more energy. This improvement was repeated across the board, whether I played a CD, SACD, or streaming digital music file.

I should point out that, once after several days away, I sat down to stream some music through the Mac Mini but couldn't get any sound from the Yamaha CD player. I checked all cable connections and verified that the audio output settings were still correct on the Mac Mini. Normal operation returned after uninstalling and then reinstalling the Yamaha USB driver on the Mac Mini. This temporary loss of communication between the Mac Mini and the Yamaha could have been the fault of either device. At any rate, the issue only occurred once, and it took less than 10 minutes to resolve...and who among us has never experienced at least one operational issue with computer audio? High Points
• The aesthetics, internal design, and overall build quality of the Yamaha CD-S2100 CD/SACD player are impeccable, befitting a product at this price point.
• The Yamaha player is highly resolving but never clinical, revealing micro details that lesser players cannot reproduce while bringing an extra bit of energy to recordings.
• On well-engineered recordings, the Yamaha CD/SACD player places performers precisely within a wide soundstage, holding them in that space with rock-solid stability, bringing greater realism to the presentation.

Low Points
• The CD-S2100 does not provide multichannel SACD playback.
• The player's small display makes it difficult to read from across the room.

Comparison & Competition
Other notable reference-grade CD players that have similar feature sets include the Marantz SA-11S3 ($3,995) and the Esoteric K-07 ($5,995). Pricewise, the Yamaha CD-S2100 player is the least expensive of this group of high-end CD/SACD players with DACs. While I've not had the opportunity to personally audition these specific models, both have received very positive reviews. We have also reviewed the Simaudio Moon Neo CD Transport/DAC, which sells for $3,000.