With the introduction of Ultra HD displays, the question of Ultra HD content has become acute. Can Blu-ray handle it? Will there be another disc format for the new content? If not, where is it going to come from? Andrew Robinson examines the issue. 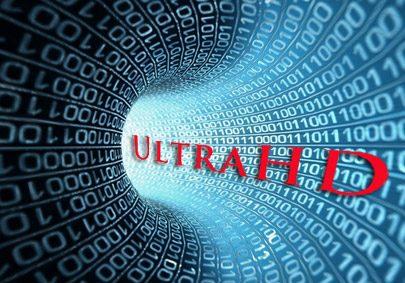 Since CES 2013 wrapped up, all anyone has been talking about, present company included, has been UltraHD (formerly 4K) and whether or not you need it, want it, can afford it or if it's even any good. The next question is obviously when we can expect to see UltraHD content and whether or not that content will come via a disc or via the Internet, aka streaming. To be truthful, both are probably an equal distance away, as there is no disc format on the horizon and, while steps are being taken to get broadcast and streaming there, they too are still a way off. So let's just ignore UltraHD for the time being. In fact, let's ignore all formats for the sake of this discussion and focus purely on two different delivery systems: physical discs and streaming.

Agree with me, or hate me, I think (hope) Blu-ray is our last rodeo with physical media. I think discs of all types are but dead formats walking, especially Blu-ray, as it is the least prevalent in terms of market share. Moreover, streaming popularity grows by double digits every year whereas Blu-ray has slowed - note, I didn't say stopped. Blu-ray will never be as big as DVD nor VHS before that, and the recent news that only last week the Blu-ray Association found it necessary to form an UltraHD taskforce charged with discussing (note I said discussing) the viability - not probability, but viability - of an UltraHD/Blu-ray format is more than a little disconcerting. I mean, if the Blu-ray Association is only just now weighing their options, I'm not holding out much hope that tomorrow, or even the next day, we'll have a decision, let alone a format. But even taking into account this recent news, I just don't think discs are where it's at, so to speak, and the people with the biggest say - the studios - don't appear to want discs, either.

Here's the problem with discs: the content is written upon them in one form or another and then handed to the customer. Granted the customer (likely) paid for that content, but that doesn't mean that the studios or content creators actually like the transaction. Once the disc is in your hands, the fate of said content is no longer in theirs (the studios). So while most law-abiding citizens will simply enjoy their movies from the comfort of their own homes, it's the handful who aren't law-abiding who have the studios running scared. As more and more content is gobbled up via mobile platforms, the studios are keen to want to cash in on those emerging markets. As great as Blu-ray is, the amount of players out there can't hold a candle to the number of iPads or smartphones currently in consumers' hands. While streaming may not quench the diehard enthusiast's thirst for quality and/or bragging rights, make no mistake, it more than scratches the itch the vast majority of viewers have. It also allows the studios to maintain some measure of control over their wares in ways physical media never did, for no longer will you, the customer, physically own anything.

It's not that streaming video isn't impossible to pirate, but it isn't as easy as, say, ripping a DVD or Blu-ray. Furthermore, with more and more streaming services requiring a secured account, if such shenanigans were to occur, the powers that be will (theoretically) have a far easier time finding who's responsible versus the needle in the haystack proposition they face now. Pushing the piracy issues aside for a moment, streaming also allows for better, more targeted marketing opportunities down the road. We see recommend lists as helpful guides to discover new content. The studios see that as an advertising opportunity, even if you're not wholly aware of it. And it's not as if the studios are losing any money, for we've already seen that they have no qualms about charging the same, and in some instances more, for streaming as they do for a physical disc. Only the streaming file didn't come with the added expense of a jewel case, printing costs, etc., though you could argue the server space and bandwidth needed to serve said content is far from free. In truth, the whole system is simply cleaner (as odd as that may sound), for it allows for a measure of control, while giving general consumers what they really want, which is all their content at the push of a button. Subscription-based entertainment via the Internet is the next real frontier as it pertains to home entertainment, not UltraHD and especially not another disc format.

You'll automatically be entered in the HTR Sweepstakes, and get the hottest audio deals directly in your inbox.
Author
Andrew Robinson
When you buy through links on our site, we may earn an affiliate commission. Your support is greatly appreciated!
This is the static ad content. This is just a placeholder for now to get things styled.
Visit Website