YouTube first launched its live Internet TV service in April 2017. Initially the service was only available in a few markets and through limited methods--namely, Web browsers and mobile devices. However, the Google-owned service is now available in a lot... 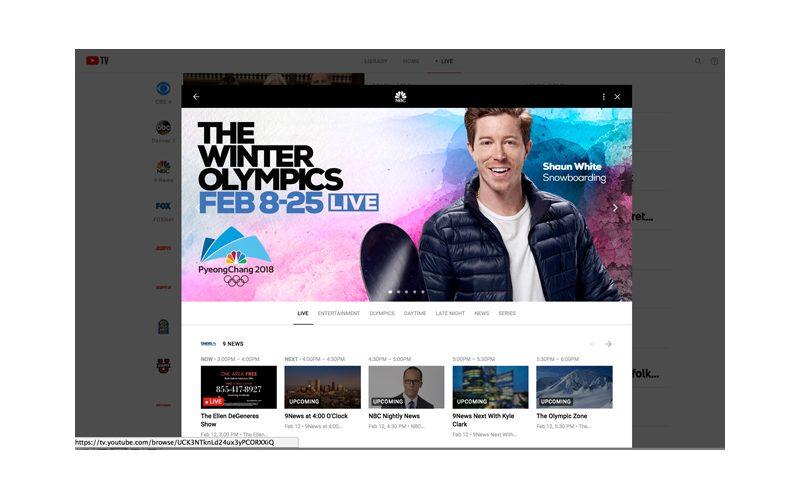 YouTube first launched its live Internet TV service in April 2017. Initially the service was only available in a few markets and through limited methods--namely, Web browsers and mobile devices. However, the Google-owned service is now available in a lot more regions around the country, and in November the company began rolling out apps for various streaming media devices--first (and not surprisingly) to Android TV devices and the Xbox, then to some smart TVs, Apple TV, and Roku. There's no app for Amazon Fire TV; and, given how Amazon and Google are getting along, we probably shouldn't expect one anytime soon.

While competitors like Sling TV and PlayStation Vue offer different programming packages at different price points, YouTube opted to keep it simple. For $35/month, you get over 50 channels and cloud DVR functionality. YouTube TV generally doesn't enter a certain market until it can offer the big four broadcast networks (ABC, NBC, CBS, and FOX); other channels include ESPN, ESPN 2, ESPN News, ESPN U, SEC Network, Fox Sports 1 and 2, NBC Sports, Big Ten Network, CBS Sports, USA, Bravo, FX, Disney, Disney Junior, Disney XD, Bravo, AMC, Nat Geo Wild, IFC, We, BBC America, SyFy, and more. You do have the option to add a few channels à la carte, with Showtime being the most notable add-on for $11/month. There's also Fox Soccer Plus for $15/month, Shudder for $5/month, and Sundance Now for $7/month. HBO is not an option.

YouTube TV offers a free seven-day trial, so I recently gave it an audition. I signed up for the service on my laptop, which was a quick and easy process since I have a Google account already. The service pings your location and tells you upfront the channels that are available in your area. To be honest, if I had actually been signing up for the service and not just reviewing it for you guys, this is as far as I would've gotten ... because the service lacked some channels that my family watches regularly. At signup, there was no PBS Kids or Nickelodeon for my kiddo and no TNT, TBS, or CNN for me.

Ironically, on the last day of my free trial, YouTube TV announced the addition of the Turner network family: CNN, TNT, TBS, TCM, Carton Network, Adult Swim, HLN, and Tru TV. That makes the package a little bit more enticing for me. For current subscribers, the additional channels are included in the $35/month fee; however, beginning March 13, the monthly fee will increase to $40 for new subscribers.

Throughout the course of my seven-day trial, I tested YouTube TV through a variety of devices: the Xbox One X, Apple TV 4K, and Roku Ultra boxes, as well as via Web browser on my Macbook Pro. YouTube TV has good design consistency across all the different platforms, so there's not much of a learning curve when moving from one device to another. (The pictures in this review are all screen grabs from the Web browser.)

The main page has three menu options across the top: Library, Home, and Live. The Live page is where you'll find the program guide, with channels running vertically down the page and grouped by category--broadcast first, followed by sports, kids, general, then news (at least, that's how they were grouped before the addition of the Turner channels, many of which were set near the top). You can't change the order of the channels or set favorites. Beside each channel name is a colorful thumbnail picture for whatever show/movie is airing on that channel at that moment, along with the name of the show. Scrolling off to the right is the list of upcoming shows for each time slot. It's a very simple, clean guide, with big text that's easy to read. It looks a lot less cluttered than PlayStation Vue's guide in particular, but less show info is available at first glance.

The Home menu provides a list of "top picks for you" airing at that moment, followed by the ability to resume watching shows/channels you previously watched. It doesn't matter if that show was live or on-demand; you can often pick up where you left off or start at the beginning. The Library is where you can make use of YouTube TV's unlimited cloud DVR functionality, which is included in the monthly cost. Attached to a show is an "Add to Library" option (indicated by a plus sign) that sets the DVR to record all current and future episodes. The Library has sections for New Episodes, Most Watched, Recordings, Shows, Movies, Sports, and Events. In addition to show names, you have the option of adding your favorite teams. For instance, you could add "Texas Longhorns basketball" to the Library, and YouTube TV would automatically record every game that airs on one of its channels. YouTube stores everything you've recorded in the cloud for nine months. All in all, the YouTube TV interface is pretty straightforward and easy to navigate; it will seem familiar to anyone who spends any time on YouTube. Each page is filled with colorful thumbnails for all the content, with indicators laid over them that tell you when a program is Live, Watched, or Upcoming.

You can watch YouTube TV on up to three different devices simultaneously. YouTube recommends at least 13 Mbps for multiple HD streams and seven Mbps for one HD stream. Through the apps for Roku, Xbox, and Apple TV, most TV shows were streamed at a 1280x720p resolution, while on-demand movies were generally 1920x1080p. In these apps, there's no option to set a lower streaming quality to limit your bandwidth usage. Through a Web browser, you can choose between multiple quality settings, but the maximum resolution is just 480p. Audio is stereo only.

The interface includes a little "stats for nerds" tool that lets you see current versus optimal resolution for any show or movie. Even with my 75Mbps-plus broadband speed, I found that many shows began playback at a 480p resolution and then ramped up to full resolution. The picture quality could look quite good at times, but in general I felt that the quality was not as consistently good as Sling TV or PlayStation Vue. At times it took too long to ramp up from 480p, and even then the picture sometimes looked a little soft--especially compared with a service like Tablo that records over-the-air HD content and streams it to your devices.

High Points
• YouTube TV keeps it simple: one package, one price.
• The service includes unlimited cloud DVR functionality.
• The service doesn't require a long-term contract or equipment rental fees, and it is now available through many major streaming media platforms: Android TV, Roku, Apple TV, Xbox, and some smart TVs.
• The big four broadcast networks are available in most areas where YouTube TV is offered.
• One subscription supports up to six profiles, each of which can have its own library and viewing preferences.
• The Live TV guide is very clean and simple, and the user interface will seem familiar to anyone who spends time on YouTube.

Low Points
• The video quality is not as consistently good as some competing services.
• YouTube TV is not available on the Amazon Fire TV platform.
• You can't manage your recordings as you watch them. Since there are no space limitations, YouTube TV stores every recording for nine months. I like to keep a neat DVR library that only includes the episodes I haven't watched yet or specific episodes I choose to keep--so I'd prefer an option to delete shows on my own terms.
• There were a few times when the UI froze up on me, and the Live guide doesn't always auto-advance to the next time slot when it should.

Comparison & Competition
Sony's PlayStation Vue Internet TV service has gone up $10 per package since I originally reviewed it. There are four packages, priced from $39.99 to $74.99 per month, and some local channels are available in many areas. You also have the option to add a nice Sports Pack and/or channels like HBO, Showtime, and Epix to the lower-tier packages for additional monthly fees. Cloud DVR functionality is included, and Playstation Vue has good picture quality, but I think its interface is more cluttered and less intuitive than that of YouTube TV.

Sling TV has three package options priced from $20 to $40. It has the lowest starting price and the most customization options to tailor your channel lineup--in that you can also add on $5 packs, like the Sports pack, Kids pack, News pack, or Comedy pack. However, local channels aren't as widely available, and Sling charges $5/month for cloud DVR functionality--plus, the recording and DVR features aren't available with all content.

With DirecTV NOW, the base package is also just $35 but includes more channels than YouTube TV: over 60, although the broadcast networks aren't a given in most areas. Three other packages are available--priced at $50, $60 and $70--and you can add premium channels like HBO, Showtime, and Cinemax. DirecTV NOW is beta-testing cloud DVR functionality right now.

Finally, there's Hulu with Live TV, which is the only service I haven't yet auditioned. For $39.99/month, you get over 50 channels, plus access to all of Hulu's on-demand library and 50 hours of DVR storage.

Conclusion
Slowly but surely, YouTube TV is becoming a viable competitor to Internet TV services like Sling TV and PlayStation Vue. At first its programming package and device compatibility were too limited, but the recent addition of dedicated apps for various streaming media platforms, as well as the addition of the Turner channels, helps to strengthen its appeal. YouTube TV still emphasizes simplicity over variety, though. Sling TV, PlayStation Vue, and DirecTV NOW all provide more channel options overall, depending on how much you're willing to pay. The cloud DVR with unlimited storage is great, but YouTube TV needs to give us more control over the user experience in that respect. Above all, the picture quality needs to get better. You might be able to get away with 480p through a Web browser or mobile device, but the big-screen TV is far less forgiving. Right now, YouTube TV--more than the other services I've tested--looks like Internet TV, and that's not a compliment.